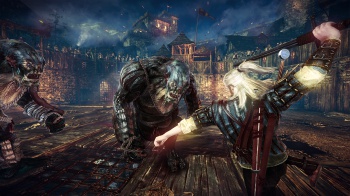 The Witcher 2 developer got angry feedback from fans when it tried to persuade pirates to pay for their game.

CD Projekt RED, the developer behind Witcher 2, famously doesn’t believe in DRM, but it did try to persuade pirates to pay for their games by writing them a pay-us-or-we-prosecute letter. That letter didn’t go down so well with CD Projekt’s fans, and in the end, the developer admits, it wasn’t the right way to go.

“We got lots of feedback from the community,” said CD Projekt’s PR spokesperson Agnieszka Szóstak, “from gamers, and not even pirates, but actually legal gamers with a legal version of the game, saying, ‘You know what, guys? That’s not entirely right to do that.'” The fans were concerned that CD Projekt was betraying its principles, by saying on the one hand that copy protection was useless, and gamers shouldn’t be exploited by greedy publishers, yet on the other was threatening alleged pirates with prosecution if they didn’t cough up the dough.

At the time CD Projekt claimed that the method used to identify pirates was completely accurate, and therefore only pirates – not legitimate users – would be affected. Michal Nowakowski, VP of Business Development, went so far as to say that, as far as he knew, “the vast majority of people identified decided to admit to piracy and pay the compensation as a means of settlement.”

However CD Projekt has had a change of heart. Even though Szóstak still thinks chasing pirates for money is fair, the developer has come to believe that the letters it sent was the wrong way to go about it.

“We’re not afraid to say that wasn’t the best choice and best solution we could have done,” said Szóstak. “And that’s why we kind of resigned and we don’t do it anymore.”