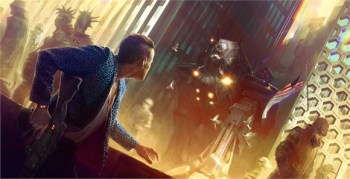 The studio behind The Witcher is working on a futuristic RPG called Cyberpunk.

The new game from Witcher studio CD Projekt Red isn’t just cyberpunk, it’s Cyberpunk, an RPG based on the Cyberpunk pen-and-paper system designed by Mike Pondsmith. Pondsmith actually introduced the game at CD Projekt Red’s summer conference, where he said that the studio’s work on The Witcher games convinced him it was the best choice to bring his future-fantasy world to life.

The new game is being developed by a second CD Projekt Red team composed of veterans of the first two Witcher releases, and like those games, Cyberpunk will be “richly detailed, non-linear” and aimed at “mature and demanding players” who will shape the game world with the choices they make. Cyberpunks will make their way through the world as one of a wide range of different classes, armed with a variety of cybernetic implants, high-tech weaponry and more. The game will be “brutal where it needs to be,” and because the Cyberpunk ruleset is already established and well-tested, the developers will be able to avoid some of the drawbacks that plagued The Witcher, which was built from the ground-up.

The Cyberpunk setting, according to Wikipedia, was first published in 1988 and most recently updated in 2005 with Cyberpunk V3. It’s kind of an odd name, given that the title is also the genre, but if CD Projekt Red can do for the dystopian future what it did for gritty high fantasy, I’ll be more than happy to let it slide. No word on when this bad boy might be ready for the limelight, but we’ll keep you posted.