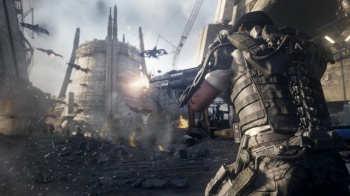 Call of Duty: Advanced Warfare developer Sledgehammer Games claims it had two and a half years to create “brand-new tech” to control and support the game.

In the latest issue of Game Informer magazine where it has Call of Duty: Advanced Warfare as its cover game, developer Sledgehammer Games co-founder Michael Condrey reveals that the shooter is being built on a new game engine that’s focused on the PlayStation 4 and Xbox One versions. In the same issue, former Visceral Games (Dead Space) employee and now audio director at Sledgehammer, Don Veca states, “We’ve had two and a half years to create brand-new tech to control and support this game. It’s something like 10 times the memory since this is next-gen. With all this extra memory and new mixing technology, we don’t have to compress everything. We can make things longer and let them breathe.”

It seems this new tech might already be reaping the benefits. According to Game Informer, the single-player campaign they’ve witnessed in Advance Warfare was more tense and atmospheric compared to previous games in the franchise. This is certainly good news — especially for those who found Call of Duty: Ghosts’ visuals a little mediocre. For a preview of what you can expect from the shooter, make sure to check the reveal trailer released last week.

Call of Duty: Advance Warfare is set for release on November 4 on last-gen, current-gen consoles and PC.