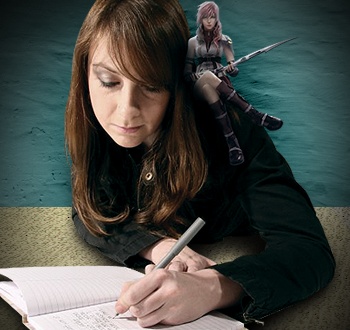 Fanfiction – and those who write it – is a frequent target of ridicule, but can it actually help make somebody into a better writer of their own original fiction?

These days, fanfiction writers are up there with furries and die-hard Naruto fans as one of the few acceptable targets to make fun of. For the most part, it’s not undeserved – a quick look at Fanfiction.net will show you picture-perfect original characters joining the series’ ensemble cast to hook up with the main character, poorly contrived high school alternate universes, random smut that ignores all characterization for the sake of hawt guy-on-guy action, and that’s just the tip of the iceberg.

But as Vanessa Cohen relates in Issue 249 of The Escapist, sometimes it can be a good thing. She herself became a better fiction writer after learning what worked (and what didn’t) in her own Final Fantasy VIII fanfic:

I began writing fanfiction as a teenager, enthralled by the B-horror of the Resident Evil series. After completing what at the time I considered an epic action tale of horror and intrigue (which these days would make slightly less sense than the story of Resident Evil 5 – and with far worse grammar), I moved onto Final Fantasy VIII. One 20-something chapter story later, I had a gang of OCs and an entire made up country. Even between these two stories, I found my style of writing changing, along with my characterization skills. Characters became more like actual people, and the twists in the story came from a more natural progression than simply “because I said so.” The original characters stuck with me so long that creating an entirely new world felt like a natural progression. However, I would never have gotten to that point without my videogame fanfiction.

To read more about how fanfiction can actually be a good thing for inspiring would-be writers, check out “From Fanfiction to Just Fiction” in Issue 249 of The Escapist.