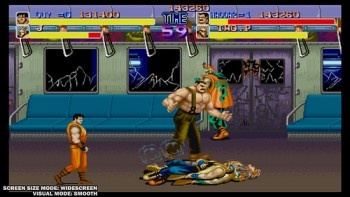 Capcom has issued an apology for the “always on” DRM in Final Fight: Double Impact, not because it’s there but because it forgot to tell people about it.

PlayStation 3 owners got a bit of a surprise when they discovered that the Final Fight: Double Impact bundle sold via the PlayStation Store requires a constant connection to the PlayStation Network. Capcom acknowledged the DRM last week, saying it was put into place to combat “rampant ‘PSN Sharing'” by limiting access to the game strictly to the PSN account that actually purchased the title. The publisher has now issued an apology to fans – not for the DRM itself, but for failing to let them know about it up front.

“Capcom would like to formally apologize for the issues consumers are having with the PS3 version of Final Fight: Double Impact,” the company said in a statement. “Typically, the notification for a required PlayStation Network connection appears in the full game description when a game is downloaded from the PlayStation Store. Unfortunately when populating this content this detail was overlooked and wasn’t included in the versions of the game that released in North America and Asia.”

“The DRM requirements for Final Fight: Double Impact are not unique to this release,” the statement continued. “This protection mechanism has been implemented in numerous games offered on the PlayStation Store before. When it was brought to our attention that the notification was missing, we acted quickly with Sony Computer Entertainment America and a fix is on the way.”

I wouldn’t expect the “fix” to actually fix anything, however, since it’s certain to be just the addition of a DRM warning rather than the removal of the actual DRM. Hope that helps!