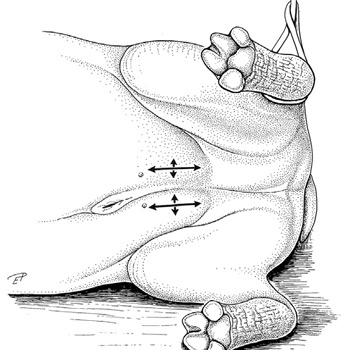 A Viennese research team has developed a new technique for hippopotamus emasculation.

I’ve never had a good reason to castrate a hippopotamus, but I’m assuming that it’s not a pleasant process, for me or the hippo. However, a team of researchers from the University of Veterinary Medicine in Vienna has created a step-by-step tutorial. Now I’ll be ready if I’m suddenly surrounded by a pack of virile hippopotami.

Unlike most mammals, castrating a hippopotamus is extremely difficult. Their testicles are located deep inside of their body, and the location can vary widely from hippo to hippo. So, even if you can manage to successfully anesthetize the beasts, you’ll probably need to dig around for a while.

In the past, castration has been impossible, but this new technique is promising. So far the Viennese team has managed to successfully emasculate ten hippos. Unfortunately, though, one died following a complication from a pre-existing condition.

Now, before you grab a pair of forceps and a scalpel, you should know that hippo castration is typically a last resort. Hippos are a threatened species, so we’d prefer that they procreate rather than sit around with a bag of frozen peas in their laps like my dad after his vasectomy. This procedure was designed for zoos that already have too many hippos, or have an overly aggressive male population.

Science is a beautiful thing.

PlanetSide 2 on PS4 Visuals Equivalent to “Ultra” Settings on PC