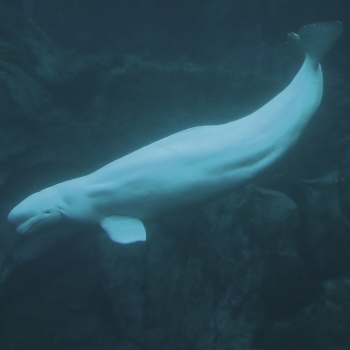 Scientists at the University of British Columbia have discovered beluga in the western Arctic carrying Toxoplasma gondii, a parasite common to cats which can cause blindness in humans.

The discovery of the parasite Toxoplasma gondii in Arctic beluga has prompted a health advisory from researchers at the University of British Columbia. Of the whales tested, 14% were carrying the parasite, prompting warnings against eating whale meat raw. Inuit whalers traditionally hunt beluga and the meat is rarely cooked. Wood for fire to cook the meat was historically difficult to find on the Arctic tundra. The presence of the parasite much further north than its typical range has raised questions and concerns about the spread of pathogens from changes in sea temperature and disappearing Arctic ice.

Toxoplasma gondii is a common parasite, often carried by cats. Many people carry the parasite without incident, but it can cause serious illness in people with comprised immune systems and pregnant women. Toxoplasmosis, the disease caused by the parasite, can cause blindess, inflammation of the brain, and can be fatal. The parasite can be killed by boiling or freezing, and scientists believe that icier conditions in the Arctic had previously prevented the parasite from moving into the region. Speaking to BBC News, molecular parasitologist Michael Grigg says, “Ice is a significant ecological barrier and it influences the way in which pathogens can be transmitted in nature and your risk of exposure. What we’re finding with the changes ongoing in the Arctic is that we’re getting new pathogens emerging to cause diseases in the region that haven’t been there before.” Higher temperatures in the Arctic as a result of climate change have allowed the parasite to survive longer. Eggs of the parasite were likely introduced into waterways from the feces of pet cats.

Dr. Grigg’s team at the University of British Columbia has shown that other parasites are taking advantage of the change in sea ice levels to spread. In 2012, Grigg and his team showed that over 400 grey seals, mostly pups, in the North Atlantic died from Sarcocystis pinnipedi, a parasite that had previously only been seen in Arctic. The parasite migrated south, moving from ringed seals into gray seals, which have never previously encountered the parasite. The introduction of pathogens to a region where they have not previously existed can cause dramatic and devastating impacts on the ecology of the region. With no existing resistance or immunity present in the organisms living in a new region, parasites like S. pinnipedi and T. gondii can spread quickly and cause significant damage.