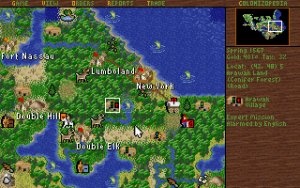 “Goddammit, am I the only one who thinks it’s morally disturbing to make a game that celebrates COLONIZATION?” Fritz said in the article. Describing information he was given about the original Sid Meier’s Colonization, released in 1994, Fritz says at first he took it for a joke. “But sure enough, it was real,” he said. “However, I dismissed it as a relic from a time when neither developers nor players took videogames seriously as media with moral implications.”

“But the idea that 2K and Firaxis and Sid Meier himself would make and release a game in the year 2008 that is not only about colonization, but celebrates it by having the player control the people doing the colonizing is truly mind boggling,” he continued.

Fritz compared the situation to the uproar surrounding a Resident Evil 5 promotional trailer which showed African zombies being cut down by the game’s white protagonist. Quoting Newsweek journalist N’Gai Croal, who said the imagery in the trailer was “messed up,” Fritz said a game about colonization is 100 times more messed up. “Throughout history, colonization regularly involved stealing, killing, abuse, deceit, and the exploitation or decimation of native people,” he added. “Anybody with a shred of moral conscience who studies the history will be appalled. Whether it was British rule in India or slavery in Africa or Aboriginal children kidnapped and taken to Christian schools in Australia or the dislocation of Native Americans in the U.S., there were no positive colonization experiences.”

He also decried the game’s inherent racism, which he said is one of the underlying principles behind every colonization effort in human history. “The obvious comparison that springs to my mind would be if somebody released a game called Civilization IV: Confederacy, in which players have to ‘lead a proud people to defend their values and traditions against their oppressive neighbors to the north,'” he said. Such a game may not require players to own and abuse slaves, but defense of the Confederacy is by default a defense of slavery, he claimed.

Fritz said he’s not calling for a ban on the game, emphasizing that 2K has every right to release it for sale. “But I think personally they shouldn’t release it, if it’s at all what it appears to be based on the early marketing,” he continued. “And I’m hoping a lot of people agree with me and will say so publicly.”