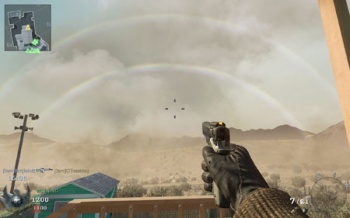 You know your game is ridiculously popular when you can sell 85% fewer copies than you did a week ago and still be the biggest game in town.

By now, we all know that Call of Duty: Black Ops had a big launch. In fact, it had a very big launch. It’s hard to put the overwhelming dominance of Black Ops in perspective, though – with such a huge launch, what can you really compare it to except other blockbuster releases?

So, here’s some perspective: According to the UK All Formats chart, Black Ops suffered a staggering 85% week-on-week drop-off in sales from its week on launch to its second week on sales. For every ten copies it sold launch week in the UK, it sold a measly one-and-a-half copies last week.

It was still the top-selling game on the market, beating #2 Assassin’s Creed: Brotherhood by an estimated 63,000 units. This was, by the way, reportedly the strongest launch ever for a title in the reasonably popular Assassin’s Creed series. To paraphrase Ms. Gwen Stefani, this crap is bananas. Absolutely bananas.

The Xbox 360 version accounted for 54% of all copies of Black Ops sold, with 40% of copies shipping on the PS3. Either that means that PC versions only made up a meager 6% of retail copies sold, or someone at the All Formats chart needs to read up on their mathematics.

Dave Perry Cautions Against the Looming Threat of Steam

That Guy Just Turned Into a Puppet!