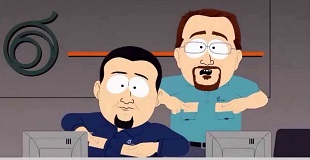 CABLE SUBSCRIBERS, PREPARE, FOR THE AGE OF RECKONING IS UPON YOU!

Comcast’s shareholders gave the cable giant’s plans to merge with Time Warner Cable the green light yesterday, while TWC voters followed suit earlier today. The Comcast vote, in which 99 percent of voters in attendance approved the merger, will see Comcast issue 2.875 shares of the company’s common stock for every share of Time Warner Cable stock available.

If the $45 billion merger is cleared, Time Warner Cable CEO Brian Roberts will receive $80 million as he exits the company.

These shareholder meetings are the latest steps that will lead to a Comcast-TWC merger, but there are several more that need to take place. The merger has not yet been cleared by the U.S. government, and Senator Al Franken (D-MN) has come out strongly against the deal. And the Senator is not the only one — just ask the Mayor of Lexington, Kentucky what he thinks of the proposed merger.

The merger has far-reaching implications for the American consumer, including quality of Internet access in the United States, corporate monopoly practices, and of course net neutrality. One giant entity with tens of millions of Internet subscribers, along with content under the NBC and Universal brands, will be a focal point as the Open Internet debate rages on.

A Librarian’s Quest to End the Stigma Against Comics