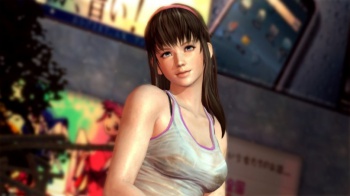 Developer Team Ninja has never hid its passion for boobs, and it will be taking extra pains in the upcoming Dead or Alive 5 to assume that its heroines’ bikini-fillers will be bouncing more accurately than ever before. Now, the deadly female fighters in Dead or Alive will have different “bounce” depending on the different costumes they wear.

In an interview with Famitsu, director Yohei Niibori said that not only would the movement of the game’s heroines’ Tahiti coconuts vary by character – a feature that the series has had for several games now – but it would now also depend on what outfit they were wearing. The level of clothing transparency would also vary between costumes, and you can make of that what you will.

Producer Yosuke Hayashi said that while released media thus far has all included entirely new outfits for the DOA crew, the game will certainly include new versions of the series’ past costumes. Kasumi just isn’t Kasumi without that blue thing she’s always wearing, after all.

Since the very beginning of the franchise, the one constant in the Dead or Alive series has been its love for bazongas. In the original game there was actually an option in the menu to adjust the bounce (in DOA2, cleverly disguised as the “player age” slider), and it’s only continued from there.

At least you can’t fault the developers for being honest.