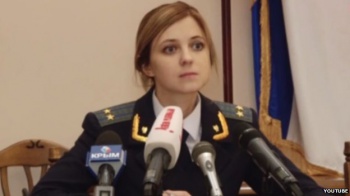 Crimea’s Attorney-General: Natalia Poklonskaya, being a rather attractive young lady, has spawned a legion of anime-style fan-art depictions.

In case you’ve been living under a rock, there’s some pretty intense stuff going on in Ukraine right now. One of the most controversial events from the conflict is the pro-Russia voters in the former-Soviet region of Crimea expressing their desire to cut ties with Ukraine and go back to Russia, something that is giving the newly-appointed Crimean Attorney-General: Natalia Poklonskaya, many headaches.

One unlikely place Poklonskaya can count on for support though, is Japan. Not because the Japanese necessarily agree with her policies, but because she is a rather attractive young lady who has managed to gather quite the following of admirers, producing some pretty top-notch anime-style fan-art. Check out the best of it below:

Most of the images were based off of this YouTube video, in which Poklonskaya is answering a reporter’s question at a press conference. And yes, that was a cat-girl Poklonskaya you saw in there.

I dread to imagine what rule34 is doing with this…

Negative Internet Feedback Isn’t About You, It’s Them