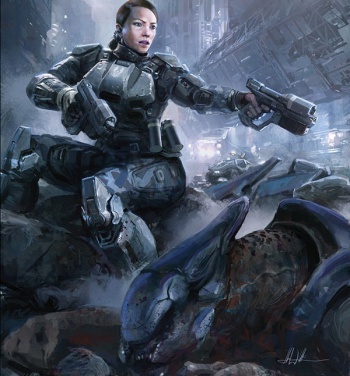 The Halo franchise is once again stepping out of your Xbox and onto the printed page, courtesy Dark Horse Comics.

This morning, Dark Horse Comics (the fine, Oregon-based publishers of comic books like Hellboy and Star Wars) announced plans for Halo: Initiation, a comic book miniseries based on Microsoft’s massively successful Halo franchise. Drawn by Marco Castiello and written by Brian Reed (a writer who worked on Halo 4 as well as many big-name comics for all of the big publishers), Halo: Initiation is slated to “hit newsstands” on August 14.

Notice the quotation marks? Comic books rarely reach newsstands anymore, so instead look for Halo: Initiation on your favorite Internet device – Dark Horse has a great iOS app – or at your local comic book shop.

With logistics out of the way, what should we expect from the miniseries’ plot? Have a look at Dark Horse’s official, super-eager synopsis:

Before she was a supersoldier defending humanity as part of the Spartan-IV program, Sarah Palmer was an ODST – Orbital Drop Shock Trooper – carrying out the most dangerous missions behind enemy lines! See how she became the first Spartan-IV commander in this must-read series for fans of Halo 4 and the Halo franchise!

Alright, so while Halo: Initiation won’t be focused on the familiar visor-covered face of Spartan John 117, it should be familiar to fans of the Halo franchise. We’ve already met other Orbital Drop Shock Troopers in Halo 3: ODST, so Ms. Palmer’s story seems a good combination of familiar concepts and new plot points – exactly what you’d hope to see in a videogame adaptation.

“It’s really exciting to work with Dark Horse in continuing the Halo story in comics,” Reed states. “After Halo 4 and Spartan Ops, fans wanted to know more about the origins of the Spartan-IV program and Sarah Palmer in particular.”

“So it’s great fun to be able to grant those wishes with a partner like Dark Horse.”

There you go: If you ever wanted to learn more about the origins of the Spartan-IV program, pick up Halo: Initiation. Reed’s never been less than a competent author, so it should be in the upper-echelons of videogame tie-ins.