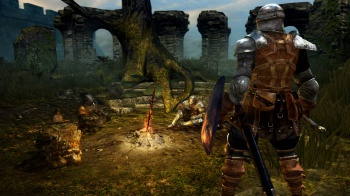 From Software and Namco Bandai reveal that Dark Souls is now murdering gamers in more than two million homes around the world.

From Software has revealed that Dark Souls, the developer’s brutally difficult action-RPG, has sold more than 2.3 million copies since its original release in October of 2011. This is a significant increase from sales figures reported in March of 2012, when Dark Souls had moved 1.19 million units and helped boost publisher Namco Bandai’s profits to its highest in years. According to information released at an event by From Software’s executive director, Eiichi Nakajima, about half a million copies were sold in Japan with the remaining 1.8 million finding homes in North America and Europe.

While still not reaching the level of mega sellers like Call of Duty, 2.3 million copies sold is still quite good for a game that is arguably on the niche side of the spectrum. Though its sales point to there perhaps being a larger audience for games like Dark Souls, it’s still surprising when you consider its predecessor, the PS3-exclusive Demon’s Souls, was considered a success for selling 280,000 copies after two quarters on the market. Granted, one and a half years is a bit longer than two quarters, but it’s still a pretty remarkable difference and definitely something that From Software and Namco Bandai have every right to be proud of.

The reveal of these sales figures comes hot on the heels of gameplay footage of Dark Souls II, which was shown off by From Software and Namco Bandai just a few days ago. The game’s director also recently confirmed that Dark Souls II will be maintaining the high difficulty standards of its predecessors, news that came as a delight to the franchise’s fans. Now all they need is a firm release date to let them know when to strap on their armor and prepare to die.

Halo 4 DLC Sees Discounts For One Day Only