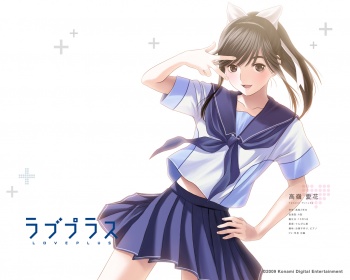 Pirates of wildly popular DS dating sim LovePlus+ received an unpleasant surprise when their in-game girlfriends dumped them … for being pirates.

Last September, I said something along the lines of “I love creative DRM.” Not the painful, irritating DRM that makes it harder for legitimate owners to play the game like limited installs, but little catches in the game that trip up pirates.

LovePlus+, the “special edition” of the very popular DS dating sim LovePlus, has creative DRM. Released in Japan last week, it was quickly ripped and uploaded to the internet – but there was a catch. According to posters on massively anonymous message boards 4chan and its Japanese equivalent 2ch, people with pirated copies can’t get the girls to ever return their affections, no matter what they do.

“I was dating her normally, but when I next restarted she was pissed at me! I can’t get her to like me, and she’s always annoyed at me… it’s the ultimate anti-piracy measure!”

“I tried the friend part of Love Plus+ again to get some scenes I missed – you’re right, she wouldn’t let us become lovers!”

“After 100 days she still won’t let me become her boyfriend. She completely ignores me and won’t send me any mail. The events aren’t happening either – brutal.”

What makes this all the more satisfying is that, since LovePlus+ is a DS game, it’s harder to circumvent this sort of copy protection. PC pirates could just download a secondary crack or patch for this kind of thing, but it’ll take more time for the ROM itself to be hacked to remove this most insidious and unrelenting DRM.

It’ll eventually be cracked, but in the meantime the lovestruck pirates must face a terrible choice: Either they pay real money to get their virtual girlfriends, or they stay lonely until the girls can be patched.