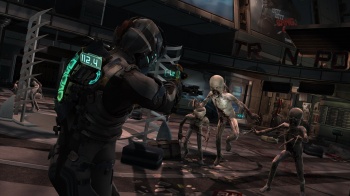 Dead Space 2 is coming to Germany in February and aside from a little change to multiplayer, it’ll be completely intact when it gets there.

It wasn’t a huge surprise when the German state of Bavaria gave the thumbs-down to the PSP version of Dead Space 2 in December. Germany is notorious for taking a hard line against videogame violence, after all. But EA has now announced that after much horsing around, the game has finally been given the all-clear and a release date for all platforms has now been set.

The game will be modified slightly in accordance with the demands of the USK, Germany’s videogame rating agency, leaving the single-player portion intact while the multiplayer mode will have friendly fire disabled. It’s a bit of an odd change given that the single-player mode is built around creatively dismembering hordes of horribly mutated zombies, but the seemingly-minor tweak is apparently enough to keep the authorities happy because it addresses concerns about killing humans in videogames.

EA said it was pleased that the state had finally given the game the rating “it deserves” but added that the painfully drawn-out process clearly demonstrated that the German rating system, at least as it regards the PSP, is “impractical.” It also said that because of the many delays in getting a rating, the game itself will be delayed a bit too: the rest of the world will get its hands on Dead Space 2 on January 25, while German gamers will have to wait until February 3.