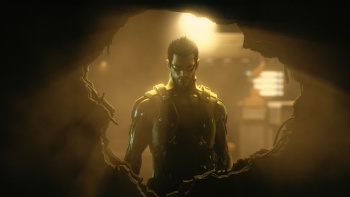 Eidos Montreal didn’t pick the colors in Deus Ex: Human Revolution because it thought they looked pretty, those colors are much more significant than you might think.

You don’t have to be super-observant to notice that the Deus Ex: Human Revolution trailers have had plenty of yellow in them. That’s not an accident, says the game’s director, and it’s not just a visual thing either.

Director Jean-Francois Dugas says that that yellow is actually gold, and is part of a dualistic color scheme that represents the game’s themes. The first, and most obvious, color – the gold – represents hope and the “promise of better selves.” The second color is black, which represents the cyberpunk dystopia and people suffering. He said that the color scheme also fit with the Icarus imagery that previous trailers had used, and getting closer to the sun. David Anfossi, the game’s producer, added that the pallete, and the meanings assigned to the colors, neatly illustrated the game’s tagline: “It’s not the end of the world, but you can see it from here.”

Using color in this very particular way isn’t a new idea – movies have been doing it for years – but it suggests that Eidos Montreal has put some real thought into the storytelling of Human Revolution. This is especially exciting when you combine it with Dugas’ comments last month about how important it was to let the player make his or her own way through the game.

Deus Ex: Human Revolution will be released for PC, PS3 and Xbox 360 early next year.