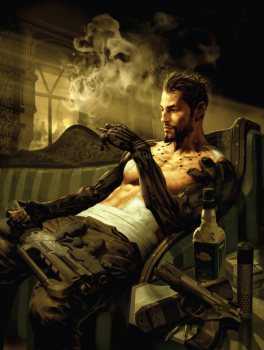 We (or at least, I) first learned that a film based on Deus Ex: Human Revolution is in the works back in November of 2012. But the excitement of seeing a franchise I love getting the silver screen treatment was tempered by the knowledge that videogame movies, almost without exception, are steaming crapola. There are semi-exceptions here and there – the first Mortal Kombat film was a lot of fun, for instance – but by and large, if you’re making a videogame movie, you’re in trouble from the get-go.

The simple solution, then, according to Deus Ex writer-director Scott Derrickson and his partner C. Robert Cargill, is to not make a videogame movie. “We just keep telling each other, ‘We’re not making a videogame movie, we’re making a cyberpunk movie’,” Cargill told Crave Online. “And Scott and I are such big cyberpunk fans from way back in the day that that just really charges us up. Because that’s what’s so great about Deus Ex to begin with, is it really gets cyberpunk.”

But they also acknowledged that the cyberpunk genre is a difficult beast in its own right, not only because of infamous failures like Johnny Mnemonic but also because of films like Blade Runner and The Matrix, which Derrickson described as “iconic and insurmountable” even though they aren’t really cyberpunk films. They’re looking at more “grounded” films like District 9, Looper and Inception as “molds” for Deus Ex, because of their more realistic approach to the genre.

“Cargill said, ‘Oh no, videogames movies always suck.’ And I said, ‘So did comic book movies, until they didn’t. You know?'” Derrickson said, “I’m a big believer and I think Cargill is now, as well, that videogames… Videogames and cyberpunk, I’m hoping that there will be a new wave of both, because there’s amazing source material for great films there.”