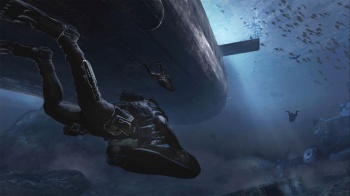 Modern Warfare 3 co-developer Sledgehammer Games has sent forth a champion to defend the aging Call of Duty game engine’s honor.

Now to be fair, the IW engine is getting a bit long in the tooth. Originally a heavily modified Quake III engine (yes, that’s the correct number of Is there) licensed from id Tech, the little-engine-that-could has been used for every Call of Duty title since 2005’s Call of Duty 2. Of course, there’s been a lot of changes to the engine since shooting Germans went out of fashion. The Quake III code is long gone, and there’s been a host of modern features added over the years, but the engine is still over half a decade old. Will that be an issue for the upcoming Modern Warfare 3? Not according to Sledgehammer games general manager Glen Schofield, who vigorously defended the engine in an interview with with CVG.

“Well I’ll tell you one thing, I’ve worked on a lot of engines over my lifetime and spent a lot of time putting graphics in to them and this thing is Porsche,” he said. “And what I mean by that is that it is stream-lined, everything in it is perfectly freaking clean. You can tell it’s been worked on for years. It’s easy to upgrade.

“We worked with engines before that are like f***ing spaghetti. You can’t work on a part and put it back in without messing with everything else.”

He went on to add that anyone who doesn’t see the difference between Modern Warfare 3’s and its predecessor has “no idea.” “There is so much that we’ve added, so when someone says ‘cut and paste’, I don’t even want to talk to them because they don’t know,” he said. “They just don’t know.”

“And then on top of that you have what we added to the audio engine. Then there’s a lot of stuff under the hood,” he added. “People don’t think about this but when you make your tools better and you can iterate twice as many times, you make the game better.”

We’ll find out if the IW engine can cut it when Call of Duty: Modern Warfare 3 is released on the 8th of November on PC, PlayStation 3, and Xbox 360.