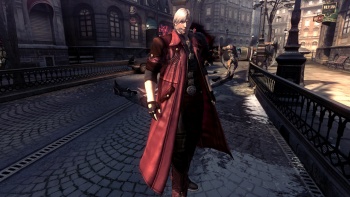 Hideki Kamiya has somber feelings about the fact that Devil May Cry‘s Dante is no longer under his control.

The Devil May Cry franchise is now squarely in the hands of western developer Ninja Theory, whose series reboot DMC appears to change everything we previously knew about Dante. Dante’s creator, Hideki Kamiya, indicates that he misses the character he first developed in 2001.

Responses by Kamiya to Twitter followers don’t straight up bash the new Dante, but they aren’t exactly enthusiastic. When one follower wrote “I miss the Dante you made,” Kamiya replied with: “I miss him too.” When another told Kamiya “It’s sad to see what you started turn this way,” Kamiya said: “I’ve been sad since Dante left me.”

A third asked if Kamiya thought Ninja Theory would “evolve” the action game standard he set with Bayonetta, and Kamiya said: “Whatever.” Whether this reply was motivated by a lack of interest in the new Dante or not isn’t clear, as it could have been lost in translation. After reports got out that Kamiya wasn’t a fan of the new Dante, he wrote:

Hello all foreign fans. Recently I got lots of comments like ‘Dante has changed,’ and someone said I was not too fond of newest Dante. But it’s not true.’Dante has changed’…that’s right. But from my point of view Dante has changed every time the sequel came out, and he was always different from whom I created first. So why don’t you wait and see how their new trial will be same as usual…? (sorry about my poor English ).

When you’re a member of the game industry, it’s really not in good form to bash another company’s product, so Kamiya may have been doing some damage control. For clarity purposes, though four Devil May Cry games have been made, Kamiya hasn’t worked on the series since the first and he’s no longer at Capcom. He’s probably been missing Dante for a decade since Capcom gave Devil May Cry 2 to a separate in-house studio that he wasn’t a part of. It’s likely to actually be interesting for Kamiya to see an alternate take on his creation, as DMC stars a new character and the game may all be in his mind. I think it has potential, even if hardcore Devil May Cry fans are a bit outraged.