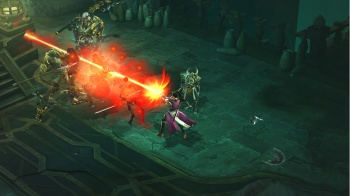 Apparently, it’s not pirates that Blizzard is targeting by requiring Diablo 3 to be hooked up to the internet all the time, it’s hackers. Game director Jay Wilson says that including an offline mode would make it a lot easier for people to hack the game, and that was something that Blizzard really didn’t want.

“If we allow an Offline mode, it changes the structure of the data that we have to put on the user’s system,” Wilson explained. “Essentially we would have to put our server architecture onto the client so that it can run its own personal server.” He said that allowing offline play in Diablo 2 had enabled a lot of cheating and item duplication, and the Diablo community had made it clear they didn’t want the same to happen with the sequel. “I would never guarantee that we’re never going to have [cheating and duplication] in Diablo 3,” he said. “But it’s one of the things that our community has been the most vocal about, wanting this fixed, and if we essentially are putting the server out there … we’re not really going to be able to do better than Diablo 2.”

He also said that he didn’t really think the “always online” condition was all that unreasonable, as internet connections were hardly rare, and that opting out of the online experience meant that you weren’t really playing the game as intended. “We’ve always viewed it as an online game – the game’s not really being played right if it’s not online, so when we have that specific question of why are we allowing it? Because that’s the best experience, why would you want it any other way?”

While the way he phrases his arguments leaves something to be desired, nothing that Wilson says is factually untrue. You could even make the argument that the internet connection is just another system requirement, like a graphics card or processor, and most people will never be in a position where they are unable to play Diablo 3, at least not for want of an internet connection. However, “most people” isn’t everyone, and it’s a little disappointing that Blizzard couldn’t come up with a better way to stop people cheating than dictating how people play the game.