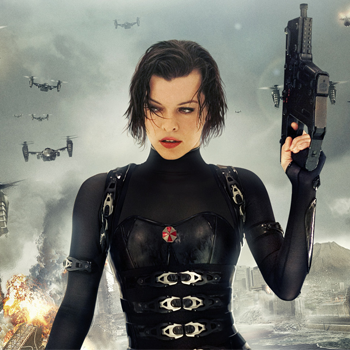 The Resident Evil movie series has now been running almost as long (and with almost as convoluted a plot) as the video game series to which it’s loosely connected. But it may not be for much longer.

Speaking to Collider, director/producer Paul W.S. Anderson – who started the franchise, has directed 3 of the 5 previous films and is married to series star Milla Jovovich – revealed that the working title for the sixth’s film’s screenplay is The Final Chapter. Said Anderson: “That’s what’s on the title page, it’s Resident Evil: The Final Chapter, so absolutely.”

Begun in 2002, the Resident Evil film franchise follows sometimes-superpowered spy/mercenary Alice (Jovovich) as she and a rotating cast of characters from the games battle The Umbrella Corporation after their unscrupulous experiments unleash a plague of zombies and mutant creatures on the world. No plot details of The Final Chapter are known, but the previous installment ended with Alice and her allies joining a fortified human resistance in Washington DC and the reveal of previously-unseen winged monsters as a new threat.