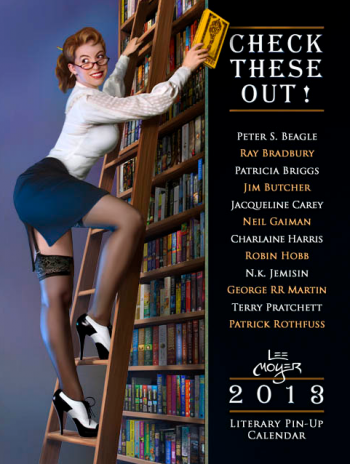 Terry Pratchett and George R.R. Martin are among the authors whose characters get Moyer’s sexy treatment.

You may remember Rincewind as the skinny drink of water with the spirit of a wizard but the body of a long distance runner, from Terry Pratchett’s Discworld series; however should you lay your hands on a copy of Lee Moyer’s 2013 Literary Pin-Up Calendar you’ll note one or two minor changes to the canon. Moyer has taken – with full permission from the authors concerned – inspiration from some of fantasy’s most well-beloved characters to create this latest version of his charity cheesecake series.

The last time Moyer – a Dark Horse and DC Comics veteran – tackled something like this, he used the likes of Dickens and Hawthorne. However Moyer decided that 2013 deserved living authors’ works, not the dead and dusty Twain, and so he contacted twelve fantasy icons and asked if they wouldn’t mind lending Moyer their characters for the next calendar. They agreed, and thus Rincewind with a fake beard – among other things – was born.

The calendar is part of a charity effort produced in conjunction with Worldbuilders, an organization whose mission statement is “to use the collective power of readers, fellow authors and book lovers to make the world a better place.” Worldbuilders founder Patrick Rothfuss claims to have been inspired by Batman, arguing that the costumed crime fighter really isn’t making the world a better place by beating up Joker, when he could be donating his billions to good causes instead. “He fights crime because it makes him feel good,” Rothfuss argues, “not because it does good. There’s a difference.”

Not all of the characters featured are known at this point. Whether or not the likes of, say, Harry Dresden will get the Rincewind treatment is an open question. The calendar can be pre-ordered here.