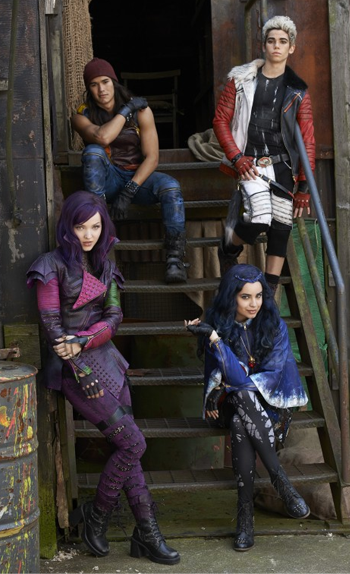 Move over, Mean Girls – Meet the sons and daughters of Jafar, Maleficent, The Evil Queen and Cruella DeVille

Disney Channel has revealed the first cast photo of the main characters in its upcoming TV movie (likely hoped to be the start of a franchise and/or series) Disney’s Descendants, showing off a fierce foursome looking very much like modern-day incarnations of their (in)famous parents.

The film’s high-concept premise takes place in Audoran, a modern day kingdom inhabited by the good characters from the Mouse House’s animated fairytale films – having exiled the various defeated Disney villains to an island prison. The story’s conceit is that the kingdom’s new leader Ben, son of Queen Belle and King Beast, aims to mend fences with the baddies by allowing their teenage offspring the opportunity to attend an elite prep school that previously only admitted the “good guys'” kids.

The characters pictured (clockwise from top left) are Jay, son of Jafar, Carlos DeVille, Evie, daughter of Snow White’s Evil Queen, and Mal, whose mom is having kind of a big year. Most of the actors are Disney Channel fixtures or newcomers, though you may recognize Booboo Stewart (“Jay,”) from Twilight or X-Men: Days of Future Past.

The film will presumably be based around complications faced by the titular Descendants attempt to integrate with their classmates, many of whom are the children of their parents’ heroic nemeses. Currently confirmed to appear are the aforementioned Ben, Fairy Godmother’s daughter Jane, Sleeping Beauty’s daughter Audrey, Cinderella’s son Chad, Mulan’s daughter Lonnie, and a character named Doug described as “the son of Dopey.”

Directed by High School Musical’s Kenny Ortega from a screenplay by writers from Desperate Housewives, Disney’s Descendants is scheduled to debut in 2015.