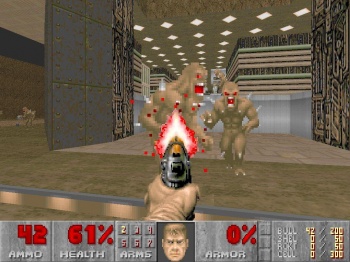 Nearly two decades after its release, id’s classic shooter Doom, has been removed from Germany’s ‘List of Media Harmful to Young People’ and given a USK16+ rating.

Doom, along with its sequel Doom 2, were removed from the list – simply referred to as the Index – after an appeal filed by current copyright owner ZeniMax Media, which also happens to own Bethesda Softworks.

The index, maintained by the slightly Orwellian sounding Federal Department for Media Harmful to Young Persons, is essentially Germany’s answer to an Adults Only rating, and is mostly used to limit minors’ access to the nation’s distinct brand of hardcore pornography. Being indexed means a title cannot be sold, advertised or displayed anywhere inquisitive young kiddywinks might venture. The index also places a great deal of restriction on how the title is sold via mail order, essentially limiting sales of indexed titles to seedy brick-and-mortar stores.

After ten years, the owner of an indexed title can appeal to have it removed from the list. While id never bothered to appeal the indexing back in the 00’s, current Doom copyright holder ZeniMax, having acquired the developer and its copyrights back in 2009, apparently thought it was worth the effort. Whether ZeniMax is seeing potential for a Doom re-release, or if this is simply about the principle of the thing, it’s certainly good news for German gamers.