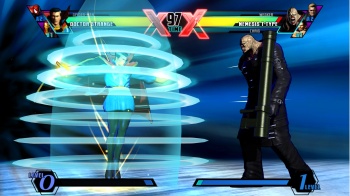 Capcom has released another batch of Ultimate Marvel Vs Capcom 3 images featuring tentacles, goo and a wizard in a skirt.

Though a few classic MvC3 characters appear in the gallery below, the focus is definitely on Resident Evil’s Nemesis and Marvel’s Dr. Strange.

The former is a hulking abomination of science hell-bent on smashing members of the S.T.A.R.S. team into bloody paste, while the latter is a crippled surgeon with a propensity for archaic tongues, cryptic warnings and the wackiest color scheme Steve Ditko could imagine.

Befitting the above description, Nemesis seemingly moves slowly, relying on his massive bulk and wildly damaging attacks to crush foes, while Strange prefers a more cautious, guarded approach based on spell-casting and dazzling opponents with his totally masculine manskirt.

Alright, admittedly, that’s a childish slight against Dr. Strange. It’s a tunic, if anything, flouncy as it may be.

Capcom announced today a final release date of November 17 for Ultimate Marvel vs Capcom 3. The PS3 and Xbox 360 fighter will be priced ¥4,990.

There is still no official release date for the United States or the European territories, though one could probably assume that the latter two areas will also be seeing the game around that time. Localization is a tough job, but Capcom is a smart group that no doubt realizes the profit to made from a near-simultaneous worldwide launch.

On the opposite end of the spectrum, in news that is likely only important to myself and a handful of lonely comic geeks permanently trapped in the 1980s, “sumoslamman” of the I Speak Comics blog has penned a primer on Rocket Raccoon for those of you who don’t live and breathe Marvel ephemera. Rocket is scheduled to appear in UMvC3, so this is likely a good time for you all to bone up on the history of Marvel’s favorite gun-toting, anthropomorphic, wise cracking space rodent.

Presumably he will be appearing in a forthcoming media blast, and I will try my best not to insult his adorable little raccoon clothes.

Take on Battlefield 3 With a Buddy