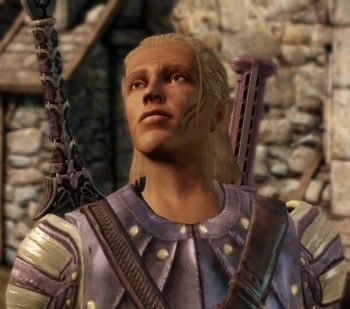 Dragon Age lead writer David Gaider says people who complain about same-sex relationships in the game “don’t have a leg to stand on” as long as romances are optional and need to be actively pursued by the player.

I was a little surprised when Zevran of the Antivan Crows invited me into his tent one night during a break from battling the Darkspawn onslaught. But then I thought, hey, he’s an elf, I’m an elf and whatshername is all the way over there on the other side of the field. So I took him up on it. And you know what? It was kind of weird. Luckily, he seemed to take it pretty well when I gave him the “just friends” speech the next morning, although it’s always hard to tell with that guy.

“So long as romances of any kind are optional and need to be actively pursued by the player in order to be experienced, [complainers] simply don’t have a leg to stand on,” he wrote. “Advocating that nobody should be able to have content you don’t intend to personally use is largely pointless – outside of a vague notion that such efforts should go towards other things, instead.”

“The resources we can devote to a minority of players isn’t great, but I imagine to those players it’s quite worth it,” he continued. “And I would hope that some folks could be sensitive enough to be happy for those players, at the very least out of the selfish notion that they may one day end up in the minority of some content issue and receive the same consideration if nothing else.”

All of which sounds pretty reasonable to me. The late, great Canadian Prime Minister Pierre Trudeau once said, “There’s no place for the state in the bedrooms of the nation,” and I think that applies equally well to videogames. If you’re that worried about what a player does with his pretend free time in a videogame, maybe you should start thinking about better ways to occupy your own free time in the real world.