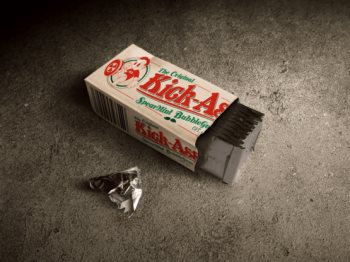 Duke Nukem: Mass Destruction will apparently be a top-down action-RPG set among the stars.

Point yourself at AllOutOfGum.com and you will notice an image of “Kick-Ass Spearmint Bubblegum,” as well as logos for Interceptor Entertainment and 3D Realms and the near-ubiquitous countdown to something. Except that unlike most such teaser countdowns, this time we know – or think we know – what’s cooking.

Duke Nukem: Mass Destruction is “a top-down action role-playing game for PC and PlayStation 4,” according to the Facebook page of the same name that’s mentioned in the site source. Further details can be found in a snippet of “alien text” that was translated after the site reached a sufficient number of Facebook likes.

“Duke kicks ass across planets in an Unreal engine-powered galactic adventure to save the President from an apocalyptic alien threat,” it states. “All new enemies [and] a neverbefore seen arsenal of devastating weaponry and series-first mechanics, including experience points and tech trees, will let Duke rip em a new one in a way he never has before.”

The teaser site was taken offline a day or so ago and the alien text that described the game was no longer present when it came back, but the Facebook page is legitimate and the description of the game as a top-down ARPG matches up. And while it sounds like kind of a crazy idea at first blush, there’s really not much to lose after the debacle of Duke Nukem Forever. It also bears remembering that Duke Nukem began life as a Commander Keen-style side-scrolling platformer and didn’t make the transition to FPS until several years later.

Interceptor Entertainment put itself on the map last year with its remake of Rise of the Triad, while 3D Realms is best known these days as the company that couldn’t make Duke Nukem Forever. Interceptor CEO Frederik Schreiber hinted that he had big ideas for the Duke last November, when he wrote on the Duke4.net forums that he’s “tired of Pigcops, Turd Jokes and a Goofy Duke Nukem.”

“I would love to see a Duke Nukem game, taken in a completely new direction. A way more serious and ‘Badass’ Duke, with an epic plot. Something that really brings back Duke as an Action Hero,” he wrote. “That reminds me of how tired I am of strippers, babes etc. in Duke Nukem games, which only degrades Duke’s intelligence even more (there is nothing wrong with Duke Liking strippers and babes, but it shouldn’t be the main plot of a game). Give us a Duke game without strippers, a great sinister villain than can break Duke (Think Bane from DK:Rising), a slightly older, and way more badass/gritty Duke, and a galactic plotline that can be taken seriously, and I’m Sold!”

Superman and Jesse Eisenberg Face Off in Spoof Video