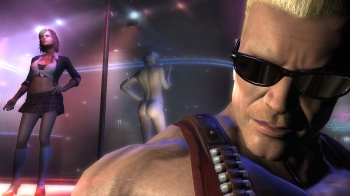 Sexuality is an important theme in Duke Nukem Forever, which is why Gearbox originally planned to give Duke a sidekick with a different one.

Duke Nukem is all about sex, baby. He goes after aliens once they try to steal Earth’s women. He says of a female monster, “I’d still hit it.” He even starts the game (or the game’s demo, actually) getting oral sex from two women dressed as schoolgirls. Suffice it to say that sex is part of The King’s whole appeal.

According to Gearbox boss Randy Pitchford, part of the original plan for Duke Nukem Forever was to give Duke a sexual foil as a sidekick in the form of a gay robot. “Sexuality is part of the Duke personality,” Pitchford explained, and the team wanted “to explore how Duke would relate to a peer that might have a different sexual orientation.”

Though Pitchford said that he couldn’t elaborate because the team might bring the gay robot sidekick back later on, he did say that the robot’s story ended tragically. “Ultimately the robot was in a situation where for an order for victory against the aliens to be accomplished, the robot’s inner workings – a nuclear generator – had to be sacrificed.” I think there’s a TV Trope for that.

Pitchford said that the sidekick wasn’t necessarily played for laughs, either. “The exploration was all very sincere and real and maybe we’ll come back to that at some point.”

I’m not so sure, though. Sexuality – and homosexuality in particular – is still a very touchy subject in the real world where LGBT people are subject to harassment and discrimination. It’s all the more rare to have homosexuality explored in games without being reduced to a joke.

Gearbox may have intended to be completely sincere in its treatment of the subject, but this is a game about a super-macho chauvinist fighting pig-aliens who have stolen Earth’s women. It’s hard for me to imagine the gay robot sidekick as being treated as anything but one giant gay joke. Maybe Gearbox will go ahead and prove me wrong.