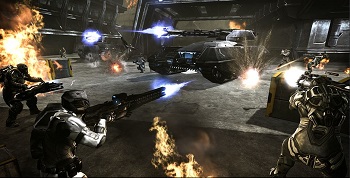 CCP invites old players back to test out the game’s improvements.

It seems there are a lot of players out there who tried CCP’s F2P shooter Dust 514 back when it launched, but failed to be impressed. CCP admits as much on its website, saying “perhaps the mechanics weren’t polished enough for you, you had issues in Planetary Conquest, or were otherwise just not happy with it.” They feel the player’s pain, and have done a lot of updates since then. To get former players to come back for a second round, they’re starting a welcome-back program that will hand you some free dropsuits to play with.

All accounts that have been inactive for the last 60 days will be gifted 100 copies of both the Black Eagle Scout and Quafe Scout dropsuits. These accounts have also been accruing passive skill points, so returning players will have a ton of stuff waiting for them.

Since its launch, CCP says that they’ve tweaked almost every aspect of the game. The dropsuits, weapons, and modules have all been rebalanced, matchmaking has been improved, vehicles have been reworked, and the controls have been touched up.

Recently, CCP has been vocal about overhauling Dust 514. Last week, its new producer talked about the plans he has for the Eve-connected shooter. While he claimed that he was only going to make an awesome game better, the welcome-back program seems to admit to a few more flaws. However, games are fluid things today, and hopefully Dust can get the momentum to push past it.