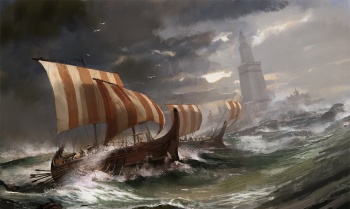 Civilization V‘s new features, like the social policy trees and the hex-tile combat, totally change how the game is played – in a good way.

I’m a Civ-freak and I’ve taken over the world multiple times in all of the game’s iterations. Getting to see the hex grid mechanics and city state features at this year’s GDC was enlightening, but, here at E3, Firaxis producer Dennis Shirk was able to show me just how awesomely some of the other new features are going to impact my strategy.

The combat in Civ V is very different. Only one unit can occupy a hex, so arranging your armies in a line is the only way be effective. Ranged units, such as cannons, are used to soften up defensive positions but they need to be protected from a frontal assault. Plus, units get a +15 percent bonus when there is an allied unit next to it.

All of the combat changes are to prevent the “Stack of Doom” into which previous Civ strategy usually devolved. This made clear by the demonstration given by Peter Murray from Take-Two Interactive. “With clever selection of units, good, efficient use of terrain, and solid tactical deployments, one unit of Riflemen held off an attack against three military units and actually beat them back pretty badly,” Murray said. “When you’re able to do that, that feels really good. The Stack of Doom model really favored the civilization that had the biggest production capability. Now, if you don’t have the biggest production, but you’re a good general on the battlefield, you’re going to be able to hold out for a little while longer. And that feels really cool when that happens.”

When you do get to take over a city, you now have a third option instead of capturing it outright and adding it to your civ or razing the city to the ground (which now takes a turn for each population size number). You can set up a puppet government, which gives your civ all of the resources of that city (gold, culture and science) but you cannot direct its production. This way, the amount of unhappiness that would be produced from a captured city is reduced.

Another innovation that I personally think is genius and long-needed is the ability for land units to “embark” into sea travel without having to build dedicated transport units. “You don’t have to build transports and fill them up with units anymore,” Shirk said. “Now, they take the turn, and load themselves into the water. It’s like they’re loading themselves onto a ship, but they’re defenseless. [Embarking] makes it very easy to stage a cross-continent invasion, which was always very difficult to do before, but they are wide open [to attack]. [Opposing navies] can just mow through them, so you have to build a strong navy to defend them.”

Other than combat, Dennis Shirk told me about the new social policy system which replaces the civics of Civ IV and integrates with the culture system. “With the social policies, you have ten different branches that you can go down. Liberty, Tradition, Piety, things like that, and they all have policy trees underneath them,” Shirk told me sitting at a booth in the 2K Games lounge. “Culture is the currency for these trees, so you’re unlocking these trees as you go through time. The further in time you are, the more trees become available to you; and you’re using culture [points] to buy these powerful policies.”

There are ten trees in total, and each has about four or five policies to unlock within them, but you’d be hard-pressed to unlock them all. “If you fill 6 out of the 10 trees, fill ’em all up, that unlocks a world wonder called Utopia. It’s the biggest wonder in the game. If you build it, and no one stops you from building it, that will win a culture victory,” Shirk said. “Before in Civilization IV, it was about maintaining the top 3 cities that have the most culture output, [lead designer] Jon [Schafer] really wanted to do something cool with culture and make it something that you can really strive for.”

One example given of a social policy was that under the Tradition tree is a policy called Aristocracy, which gives +33 percent bonus to building wonders. The goal is for these policies to be important for everybody, and not just the culture players. “Even if you weren’t going for a culture victory, if you’re going for the military path or the science path, these are really powerful modifications that make your civilization really, really unique,” said Shirk.

City-states are another great innovation, but it was revealed that these NPC single-city civilizations will figure prominently into the Diplomatic victory condition. “City States have votes, too. If you have a city-state that’s been conquered by another civ, and you liberate them from that other civ, you’re almost guaranteed a vote in the U.N.,” Shirk said. Gone are the days of massive vote numbers in the U.N. tied to population; every civ and city state gets only one vote. This makes befriending the city-states very important if you want to secure a Diplomatic victory.

The Science victory, where you build a spaceship to reach the stars and win the game, is probably the most similar to all the previous Civs. “One of the small differences that we added in is that when you build your spaceship parts, they have to be driven by truck to the capital for assembly,” Shirk told me. “So there is always that little bit of possibility of killing something out in the open to stop someone from achieving a space race victory.”

We got to see this in action during the demo. Playing as Rome, we used a gunship helicopter unit to scope out Montezuma’s territory and saw that he was trucking the last spaceship part, the cockpit, to his capital of Tenochitlan. Because he’s deployed quite a defensive position, with anti-tank guns and SAM units entrenched on a mountain range, there’s no way that the Romans could take the capital through conventional weapons. That left only one possibility: Nuke ’em back to the Stone Age.

The ICBM blast animation was impressive, filling the screen with white light and leaving a huge mushroom cloud over what was left of the Aztec capital. Tanks that were conveniently placed outside the blast range of the nuke then steamrolled into the city and captured it. Oh, and the spaceship cockpit was incinerated, stopping Montezuma’s space victory in its tracks.

I can’t wait to get my hands on this game and try some of these tactics out for myself. Civilization V is out for the PC on September 21st, available on Steam.