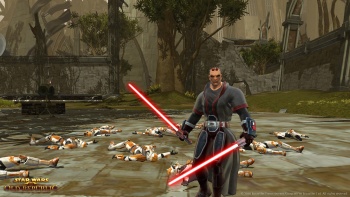 A short time ago, in a convention center far, far away…

Star Wars: The Old Republic‘s “Sacking of Coruscant” trailer was one of the best E3 trailers I’d ever seen, so expectations were pretty high for this year’s trailer. I’m happy to say that this year’s trailer, “Hope,” is even more amazing than I, well, hoped. It opens with the Empire’s attack on Alderaan and focuses on a thrilling battle between the resistance forces and the Imperial invaders. The whole thing is just amazing and nicely sets the mood for the game.

As an Imperial column marches through the wooded mountains of Alderaan, a group of Republic soldiers waits in ambush. The soldiers launch their attack, sending blaster fire through the column. Things seem to go well for a while, until the presence of a Sith turns the tide against the brave resistance fighters. Then, just when all hope seems lost and the leader of the Republic’s forces is finally dragged to stand in front of the victorious Sith, a Jedi knight appears and, well, the climactic resolution is best seen for yourself.

After the trailer, BioWare quickly covered the same ground we’ve been over so many times before. Yes, this is a fully-voiced MMOG. Yes, it has heroic combat with lightsabers and a cover system. Yes, your choices drive the story and the action. But we’d heard all that before and were anxious for something new. Though we didn’t get quite as much as we’d hoped (particularly following the recent companion character announcement), we did learn a few things that we wanted to know.

First, every character will have their own personal starship. Serving as a base of operations like the ships in Knights of the Old Republic or Mass Effect, these starships will allow players to interact with their companion characters and, presumably, tie in to the game’s economy and crafting systems. The ships we saw, a Corellian light corvette for the Jedi and an Imperial transport for the Sith, were actually very impressive and bound to serve the aspirations of every Star Wars fan.

Next, the team revealed a bit of the visual progression we can expect from the Bounty Hunter class. We’d seen some of this progression before with other classes, but this was the first chance I’d had to view the whole range of options, from the blaster-armed, kneepad-wearing level 1 all the way up to the armor-clad, rocket-punching master bounty hunter at the top of the level cap.

We also heard just a bit about the PVP system. The game will focus PVP action in war zones, which encourage players to engage in team-based combat between factions. The only war zone announced today we Alderaan, but there will be more.

The demo closed with a look at group combat. While the game is designed to be very solo friendly, BioWare definitely wants to encourage group play. The example that we saw included four Republic characters fighting off a Sith invasion of their Republic starship. The trooper is the heavy fighter of the group and focuses his attacks on the enemy’s largest and most deadly fighter, in this case, a large battle droid. The Jedi Consular’s role is to hang out along the fringes of the battle, making sure to keep the trooper healed up. The two other characters, the Jedi Knight and the Smuggler, are there to handle the lesser enemies and keep them off the trooper’s back. It was interesting to see how the different roles interacted in the fight, particularly the way that different class types broke off from their main roles from time to time to tackle new challenges.