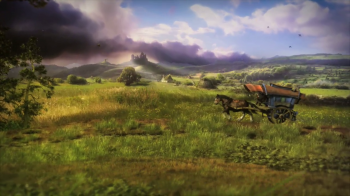 Decide right now how much you like looking at horse butt.

Peter Molyneux can sell anything. Anything. His ability to make you share his vision and believe every last word coming out of his mouth borders on magical. Yet even he was unable to convince me that Kinect title Fable: The Journey is anything other than a really dumb idea.

Though it takes place in the Fable universe, The Journey is not actually connected to that series of games. It has nothing to do with The Hero, or the revolution that took place in Fable 3, though Theresa the seer does appear in it. Perhaps that’s why it’s not being developed by the Fable team; the crew from Milo & Kate (aka Project Milo) are in charge instead.

The demo was assembled for the purposes of E3 and so doesn’t show off the game itself, but we got to see the basics of the Kinect-powered gameplay. You play as a mage driving a horse and carriage, who picks up Theresa as she’s running from forces unknown. You play in first-person view, and although you will occasionally leave the carriage to move around on foot, you’ll spend most of your time in the driver’s seat, which presumably means you’re going to spend a lot of time looking at your horse’s rump. But you’d best regard that rump with affection, because horse is the new dog. You’ll be “setting up a relationship” with your horse pal, and can upset him if you whip him too hard or treat him too cruelly.

One thing that Molyneux really wanted to emphasize was that The Journey could be played comfortably – something not altogether true of many Kinect titles. You are, after all, seated in the game, so it makes sense that you can be seated as you play. The gestures you use to steer your horse are fairly small and relaxed, and even the moves you use to work your magic are pretty low-key. Pushing your hand out throws a ball of energy, while bringing your hands together in a circle slows time. Squishing your palms together allows you to change your magic energy into something else – the demo was a bit vague on this point, but it seemed as though the spell became stronger. You’ll supposedly also be able to use creation magic to make items out of thin air. Move your hands apart to make a telescope, or stop by the river and create a fishing rod, or if you find yourself in a fight, whip up a shield. It’s the lone interesting concept the demo had to offer, and naturally we didn’t get to see it.

You’ll need to absorb Life Energy in order to gain new magical abilities, and though you can find some in rocks, you can also suck it out of living things. Draw out too much and you’ll kill the donor, which might have an impact on how people react to you. The Journey will apparently have a similar approach to morality as the other Fable games, though probably to a much lesser extent.

Molyneux kept repeating how The Journey was all about giving you control, so you feel like this powerful magic user, but that wasn’t the feeling I had coming out of the demo. If it didn’t have the Fable name attached to it, The Journey would be utterly forgettable. But instead it’s just kind of baffling. Who is this game for? Fable‘s simplified combat was already aimed at more casual players – did it need to be Kinectified? There’s also the fact that The Journey doesn’t relate to the rest of the games at all, so it ends up feeling, well, disconnected.

Despite their flaws, I’ve always been a fan of the Fable games, but I simply don’t understand the point of The Journey. Perhaps my impression will change once we get to see the actual game itself. Perhaps we won’t really spend that much time staring at a horse’s ass.

E3: Sony Gives NGP a Real Name and a Price