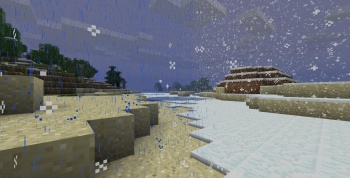 Now you can actually punch trees to gather wood!

Despite the presence of an imitator or two, indie hit game Minecraft has remained where it started – on the PC. At Microsoft’s E3 2011 press conference, though, the Xbox 360 maker announced that Mojang’s building-block phenomenon would be coming to consoles exclusively for Xbox.

Minecraft would also support Kinect’s motion-control system, said Microsoft. Presumably gamers will be able to use gestures to get a workout digging holes into the earth, building homes and palaces, and running the hell away from Creepers before they blow up.

We’ve already seen Kinect hacked into Minecraft, so it really shouldn’t be surprising to see it happen the other way around, either.

Of course, Sony isn’t totally screwed by the Minecraft devotees – the indie smash hit will be making its smartphone debut on Sony’s Xperia Play.