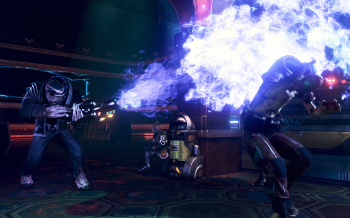 Join a bounty hunter on the seedy side of an alien planet.

When I sat down to see a demonstration of Prey 2, I figured I’d see more of what we got in the original Prey: linear gameplay, antigravity tracks, portals, and Native American mythology. What I saw instead was more like Deus Ex by way of Blade Runner.

You play as Killian Samuels, a U.S. Marshal who happens to be on the plane that fans of the first game will remember crashed into the Sphere, the giant alien ship. He survives the crash, then one day wakes up to find himself on Exodus, a planet that is perpetually half in sunlight, half in shade. He’s shocked to discover that he’s actually been there for years, making a name for himself as a bounty hunter. He thinks he’s the only human on the planet, but then runs into our old pal Tommy, and together they go on to affect the fate of Exodus.

The demo we saw took place in The Bowery, a dingy city near the planet’s equator. The developers are calling Prey 2‘s art style “alien noir,” and The Bowery was a great place to show that. It’s a little seedy, drenched in neon and desperation, a place where information is currency and your life isn’t worth all that much.

Prey was an extremely linear game, but Prey 2 takes place in an open world, which allows Killian to explore as he likes and take on missions in whatever order he chooses. He’s quite athletic, which allows him to take advantage of the game’s use of vertical space. The Bowery was full of tall buildings and high walkways, but with a bit of jumping and climbing, Killian could skip the elevator and go right to the top. His hover boots let him descend quickly, too.

In between accepting missions that will advance the story, you can pick up “ambient bounties” by just poking around. There are more than twenty gadgets at your disposal in Prey 2, including the scanner, which highlights all the NPCs in your current location, including anyone who might have a price on their head. The scanner assesses their threat level and provides all the necessary details about the bounty,including whether they’re wanted dead or alive. Other gadgets we got to see included a shoulder mounted rocket, a deployable shield, and my personal favorite, the antigravity grenade, which pops enemies up from behind cover. The gadgets will have over 40 upgrades, as well.

We got to see one of the major missions, which was a bounty on someone with an unknown location. Killian first had to intimidate an informant by shooting his bodyguard – well, he could’ve just paid for the mark’s location, why be such a spendthrift when a gun in the face will achieve the same thing? The bounty took off through the streets of the city, forcing Killian to throw some traps to try and slow him down, which didn’t work because this particular kind of alien can teleport. Once the bounty was in hand, Killian then had the choice of interrogating him or immediately turning him over to the client. Interrogating him might result in information about the game’s story, the world, or even some loot, but it also might kill him. Turning him over to the client, on the other hand, is a guaranteed pay day.

My biggest concern with Prey 2 is that navigating the city wasn’t all that easy. It was easy for the guy doing the demo to catch up to the bounty on the run, because he already knew where he was going and how to get there. But if you get lost, or miss a jump and the bounty gets away, you’ll have to either restart from a checkpoint or restart the mission entirely. If you get lost doing an ambient bounty, then too bad, you’re just out of luck. Of course, it’s hard to really get a feel for how intuitive the navigation would be from a hands-off demo that takes a portion of the game completely out of context.

The sci fi noir setting, on the other hand, has a great deal of potential. I’m a straight up sucker for the game’s Blade Runner vibe and enjoy the fact that I won’t be dealing with a protagonist who’s overly noble – but not a ruthless criminal, either. It looks like Killian will have to have a situational morality if he wants to survive his time on Exodus, and the gray area between right and wrong makes from some great storytelling opportunities.

Prey 2 looks like it will have some fast-paced action, plenty of fun toys, and a bit of a sense of humor. It doesn’t really look or feel like Prey, but given the lukewarm reception that game received, that’s probably not such a bad thing. Prey 2 will hit Xbox 360, PS3, and PC sometime next year.