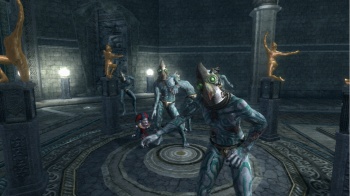 Sleep with the light on.

“This isn’t Kinectimals,” Rowan Tafler tells me as I step up to play Rise of Nightmares, an action/horror title designed solely for Kinect. “This isn’t mini games, this isn’t cute. This is brutal.” The guy on screen getting his arm cut off would seem to agree.

You and your wife are traveling through Europe by train, but the journey isn’t going well. You’re trying to patch things up when she’s suddenly kidnapped by a strange man in a mask, who takes her to a creepy mansion. He’s been performing experiments on his victims, cutting off their limps, attaching blades, peeling off their skin, and turning them into monsters. Finding your wife will require a bit of puzzle solving, a lot of combat, and even more nerve.

Rise of Nightmares is a fully free-roaming game, so the first trick to playing it is learning how to maneuver through the environment. To walk, simply move your foot forward. The further you move it, the faster you move. At least, that’s the theory – I didn’t really notice a great deal of difference between shuffling my foot out a tiny bit and taking a great big step. To turn, rotate your shoulders left or right while keeping your feet firmly placed. It takes a bit of getting used to, and I had a bit of trouble lining up exactly straight the way I wanted to, but the hallways were nice and wide and there wasn’t anything to get caught on, which helped make up for my mistakes. In some locations, you can choose to move automatically by holding your arm up at a 90 degree angle. I found that the most efficient way to move around, because I could just drop my arm to stop and look around if I saw something interesting.

Holding up your hand lets you interact with the environment, whether that’s picking up one of the game’s 40 different weapons or rummaging around in a blood-filled toilet for a key. (Yes, that’s as disgusting as it sounds, but hey, I really needed to open that door.) To fight, hold up your hands like you’re getting ready to box. Swinging your right hand down lets you attack with your weapon, while jabbing your left lets you punch. If one of the mansion’s monsters grabs you, pushing out with both hands shoves them away.

The monsters themselves are quite the horror show, though you may not have time to appreciate their design as you’re fighting to survive. During the demo, I explored a small portion of the mansion, which included the cell where I was being kept, a guillotine trap that cut my companion in half, and the bathroom containing the aforementioned toilet. The location wasn’t all that distinct, looking like it was taken from the pages of How to Do Survival Horror manual, but it’s certainly not something we’ve seen associated with Kinect before.

Exploring in Rise of Nightmares was a little distracting, because I had to focus so much on the controls that I couldn’t really focus as much as I wanted on my surroundings. You also can’t look down, which feels weird when there are items lying there that you want to inspect. I got to try a few different weapons during the demo, including an ice axe, “volatile test tubes,” which acted like grenades, brass knuckles, and an iron pipe. Weapons will eventually break, but seemed plentiful enough that there will always be something new nearby to pick up.

Rise of Nightmares may not achieve the level of atmosphere as other horror-themed games on 360, but it’s great to see something on Kinect that doesn’t involve dancing, fluffy animals, or collecting tokens. We’ll see if it can scare your pants off when it comes out in September.