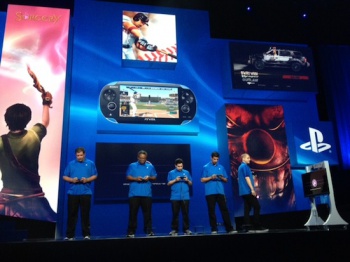 Upcoming AAA games explained as one part of a larger Sony cycle.

With more than one hotly-anticipated title slated for the next twelve pages of its calendar, it would have been easy for Sony to simply rely on its upcoming stable of games to woo the crowd with beautifully rendered environments and gory battles at its 2012 E3 press conference. And while, yes, there were pretty graphics and blood sprays galore, that wasn’t the message Sony asked gamers to take home for the upcoming year. Jack Tretton, SCEA President and host of the proceedings, spoke of connectivity, as well as the bridges that his company has attempted to form between different types of platforms, as well as different types of gamers.

Tretton began by thanking all of Sony’s fans, plastering the giant, multifaceted display behind him with a smattering of gamer portraits (composed of a noticeable majority of women). Everyone in the room clapped for themselves, and after a handful of obligatory “we couldn’t do it without you”s, the conference began in earnest.

The first speaker brought on stage was Quantic Dream’s David Cage, who took the microphone amidst heavy applause. Cage spoke briefly of both Heavy Rain, his company’s latest work, and the recent tech demo Kara, which showcased the graphical capabilities of the engine with which his team has been working. Soon, he dropped the lights and rolled a scene from what’s next, a project called Beyond: Two Souls, a cinematic experience following fifteen years of “spiritually sensitive” girl’s life. The girl in question, Jodie Holmes, was then revealed to be acted by none other than Ellen Paige, who most of you will likely remember as Ariadne from Inception. The scene played went from quiet and tense, to showcasing everything from a vicious dog attack to an exploding helicopter. It was difficult to say exactly how the game will play, but the crowd didn’t seem to mind. The video closed to a hearty reception.

As Cage left the stage, Tretton returned with a groan-inducing transition. After recapping the successes of online advert Michael, Tretton asked the question, What exactly happened to all of those game character after that toast? The answer? They all fought in Superbot Entertainment’s upcoming PlayStation All-Stars: Battle Royale. Of course they did. The rest of the game’s presentation involved a recap of previously announced fighters (PaRappa was easily the crowd fave) and a three-minute battle. After the score was tallied, Superbot gave a quick reveal: two more playable characters. Uncharted‘s Nathan Drake and a BioShock Big Daddy (who may or may not be listed as one “Mr. Bubbles”) will both be playable characters.

With slightly a smoother transition than the Michael-lead-in, a version of All-Stars was announced to be in development for the PS Vita as well, featuring “cross-play”, the ability for PS3 owners to compete live with Vita players. “Cross-save”, the ability to save on one device and play on another was also brought up, as was “cross-controller”, the ability to use the Vita as a controller for the PS3, initially coming out in the form of DLC for Little Big Planet 2.

After discussing the many merits of owning both Sony’s major console and its handheld, Tretton moved to the shared online service, PSN, and specifically, its $5/mo special service, PlayStation Plus. Plus subscribers will be receiving an even larger library of games beginning immediately, including Little Big Planet 2, Infamous 2, and Saint’s Row 2. People looking for new content for their Vita should be happy as well, with a slew of PS One classics also on their way, with Tomb Raider, Final Fantasy, Arc the Lad, Twisted Metal 2, and Wild Arms getting specific mention.

Next, we got a quick look at FarCry 3, which we learned has a dedicated four-player coop mode. A fast demonstration of four people working together to take a bridge from some baddies proved that they weren’t lying about the new mode’s existence, but didn’t show much more than we’ve already seen of how the game plays.

As FarCry finished, Tretton took a break from the hardcore games to speak briefly of Move and lead into a new peripheral, the Wonderbook, a augmented reality book-shaped accessory that works with the PlayStation Eye to bring stories to life. Wonderbook will launch with The Book of Spells, a new, interactive story by J.K. Rowling featuring some fun, extra lore from, guess what, Harry Potter.

After a live demo of someone learning Incendio, it was back to the games showcase with God of War: Ascension. There wasn’t much new there: Kratos unabashedly neglected to help hapless pedestrians from impalement, then beat up a variety of personified goats, snakes, and elephants. He did have an interesting green power that he used to rebuild some blown up scaffolding, though, which seemed like a surprisingly constructive ability for someone used to doing the opposite.

When the long-gore-fest of God of War finally ended, Tretton was expected to take the stage again. Instead, the auditorium went dark. Then, we heard buzzing, a few chirping birds, and a gusting breeze, each taking advantage of the auditorium’s surround sound. Soon, the screen slowly faded to life, and without so much as a one-word introduction, a segment of The Last of Us began to play. The scene followed the game’s Drake-styled protagonist sneak through a bandit-infested building accompanied by a cute, yet terrifyingly stabby teenage sidekick.

Sony knew exactly what it was doing wrapping with The Last of Us; the audience gasped and jumped during most the visceral, tense sequence shown, meeting its end with the loudest cheers of the conference thus far.