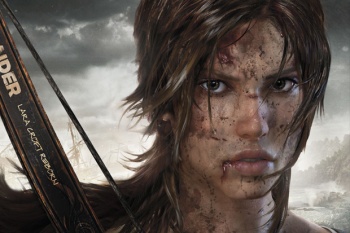 We take a closer look at a younger, more clueless Lara.

When you think of ways to describe Lara Croft, “scared” probably isn’t the first word that pops to mind, but that’s exactly what the young heroine of the upcoming Tomb Raider reboot is – and with good reason. She’s just 21 years old, setting out on her very first adventure, and has yet to acquire the many skills that we know her older self to have.

We got a brief glimpse of the new game during Microsoft’s press conference yesterday, but later got the chance to see a bit more of this newer, more fragile Lara. After she’s shipwrecked, Lara wakes to find herself held captive on a mysterious island surrounded by a veritable ship’s graveyard. Decaying vessels of all kinds dot the shore, and the natives are most definitely not friendly. During the course of the game, Lara will not only learn more about why she’s on the island – it’s not just dumb luck – but also more about herself as a person.

The first few minutes of the demo are meant to teach the player about how the game world works. Its a control tutorial, but it’s also meant to illustrate the basics like if you try swimming with a torch,your torch will go out. Sure, that’s common sense, but we’ve all played games where that isn’t true, so it’s a nice touch of verisimilitude.

The opening scene is Lara’s escape from a cave where she’s been bound and strung upside down. The escape itself is quite exciting, involving kicking natives in the face as they grab at you, a slide down a slick tunnel, and even Lara setting herself on fire, but the controls on display were disappointing. Tapping the triggers Track and Field style and waggling the left stick to shake off a native’s grasp feels like goofy busywork and robs the action of some of its immediacy. That said, the game isn’t due to come out until September of next year, so many aspects of it could change.

After Lara makes it out of the cave to discover the multitude of ships broken on the shore, the demo skips ahead to her fourth day on the island after she’s found another survivor, Conrad Roth, the captain of the ship. He’s like a father figure to her, and the scenes between them illustrated just how very different this Lara is from the one we know. In one scene, Lara discovers Roth being attacked by wolves; the two manage to scare them off, but not before the wolves make off with Roth’s pack, which contained food, medical supplies, and a radio. If there’s to be any chance of rescue, Lara and Roth need to get that radio back. He starts to head after the wolves, but collapses into unconsciousness due to his wounds. And Lara has absolutely no idea what to do. She responds pretty much exactly the way you’d expect a young, scared girl to react: she frets, she clings doggedly to the things that make sense to her, like dragging him to shelter, and then she swallows her fear and heads off after the wolves. She needs Roth to survive, Roth needs bandages to survive, so she really doesn’t have much choice.

It a complete shift from the confident, bulletproof Lara that we’ve known for so long, and it’s fascinating. It’s like getting to travel back in time and meet your sweetheart before they became the person you first met. You can see and share the experiences that ended up making Lara into the Tomb Raider.

We didn’t get to see much combat beyond button-slamming quick time events, though Lara was armed with a bow for this portion of the game. We did get to see a few of what used to be called puzzles, but in this new Tomb Raider are called “Survival Escapes.” Lara uses her Survival Instinct to help her figure out what aspects of the environment can be used to her advantage. It’s a lot like going into Detective Mode in Arkham Asylum, as most of the environment drops into black and white and items of interest glow. I appreciated the fact that it has to be activated, so if you’d like to try and figure out what to do just by eyeballing the area – the way a real Tomb Raider would – you can.

Each hub area has its own Base Camp, where you can upgrade your skills and weapons by spending the game’s currency, which has yet to be designed. Other collectibles, like journals and audio logs, will help Lara discover the truth and fill in the story. There are several ways through each part of the hub worlds, though not all paths may be accessible to you at a given time. You might need an ice axe to reach a higher path, for example, or need a higher strength skill in order to make a particularly athletic jump. Remember, this is the newbie Lara, who hasn’t yet learned to turn cartwheels while shooting bloodthirsty cougars. (In fact, this Lara actually apologizes to a wolf she has to kill.)

The Tomb Raider games have been pretty gorgeous the last few times around, and this new one is no exception. We unfortunately didn’t get to see too much other than the dank caves where she woke up and a small area around Base Camp, but the island looks like it will be pretty enormous, with plenty of interesting locations to visit. If you can see it, we’re told, you can go to it, a claim that becomes more interesting when you can see mountains far off in the distance.

There’s still a lot to learn about this new Tomb Raider, but I’m entranced by what I’ve seen so far. Lara is more interesting than she’s been in years, still familiar, but a completely different person. She’s vulnerable, fallible, and scared out of her mind, but she’s still Lara. If the puzzles and combat can keep pace with the characterization, this reboot could be amazing.