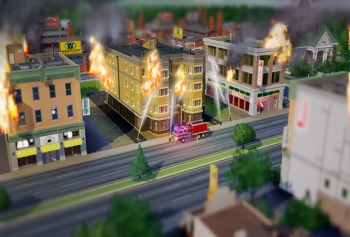 The publisher says it has reduced SimCity crashes by 92 percent compared to launch day.

The SimCity nightmare, according to Maxis General Manager Lucy Bradshaw, may soon be over. After disabling game features, working through the weekend to upgrade server capacity and, one might think, driving away a significant portion of its audience, the game is now almost in a reliably playable state. It’s not exactly a new benchmark of game development excellence, but under the circumstances I suppose we’ll have to take what we can get.

Bradshaw said the team will be monitoring servers and metrics to ensure that everything is running as it should, but it will take a few more days before she can guarantee that the situation is copacetic. For now, she said, tens of thousands of new players are logging into the game, and things are looking pretty good.

“I can’t begin to explain the way a development team feels when something you’re proud of is threatened at launch. Our biggest fear was that people who love this franchise would be scared off by bad reviews about the connectivity issues,” Bradshaw said. “But you put your faith in us. You bought the game with the understanding that we’d quickly fix the server issues. For that support – that incredible commitment from our fans — we are deeply grateful. As the general manager of Maxis, I want you to know that we cherish your faith in us, and the love you’ve shown for this franchise.”

I would point out that most gamers likely bought the game with the understanding that it would actually work, naively optimistic though that belief may have been. Speaking for myself, anyway, I’ve never laid down money for a game in the hopes that someday it might run the way it’s supposed to, but I’m old and cranky and probably expect too much.

Bradshaw’s latest SimCity update can be read in full at ea.com.