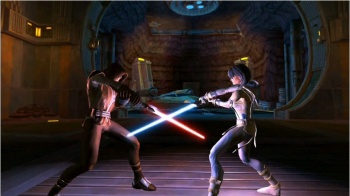 Electronic Arts is taking over a bigger share of the burden of publishing BioWare’s Star Wars MMO.

If you ignore reigning kingpin WoW, in the MMO space all eyes are on BioWare’s Star Wars: The Old Republic as the Next Big Thing. It’s a new take on the classic MMO concept using one of the most popular and beloved IPs of all time developed by an extraordinarily successful RPG studio – if there is a potentially more lucrative mix, I’ve yet to hear it.

Publisher EA is gambling on SW:TOR hitting the jackpot: The games giant has announced that it has entered into a new global publishing agreement with Star Wars empire LucasArts in which EA will be taking a larger role in the game’s distribution – and presumably reaping a greater share of the profits.

While the two publishers had obviously already had an agreement in place to make The Old Republic, the new arrangement will have EA handling “certain publishing, marketing and distribution responsibilities” that were previously the realm of LucasArts.

The Old Republic could potentially be a massive hit, there’s no doubt about that. With Blizzard’s World of Warcraft stamping gold for rival Activision every month, it’s no wonder that EA would be interested in having its own mega-MMO propping up its bottom line.

If SW:TOR is a success, taking on increased responsibility could be a brilliant move for EA. If it fails, it could become a grave wound in the publisher’s pocketbook. Only time will tell.