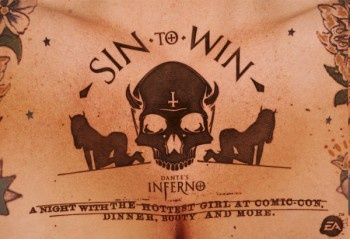 Get caught playing grabass with a nubile young hottie on the street and you’ll be slapped and/or arrested, but do it at Comic-Con and you might just win a prize.

Leave it to Electronic Arts to come up with a contest based on sexual harassment in the workplace. The Dante’s Inferno team is holding a “Sin to Win” contest at this year’s Comic Con and the rules are simple. One: Commit acts of lust. Two: Prove it. Three: Repeat.

Okay, it’s not quite that bad: The “act of lust” required by the contest is nothing more than a photo with a booth babe, which must then be sent to the Dante’s Inferno team via Twitter, Facebook or email as proof. The “repeat” part is pretty self-explanatory; the more babes you’re photographed with, the more chances you have to win.

And what’s the prize for “accidentally” rubbing yourself against all these attractive young ladies who are being paid to be nice to people they normally wouldn’t stand next to on a bus? A chance to make them spend even more time with you! The lucky winner will get, as EA puts it, “Dinner and a SINful night with two hot girls, a limo service, paparazzi and a chest full of booty.” Five runners-up will get a copy of Dante’s Infero, a $240 EA Gift Card and “tons more swag.”

The contest rules state that entrants are only supposed to take pictures and that’s all well and good, but exhorting a surging, sweaty mass of nerds to commit “acts of lust” with the tiny handful of attractive people present, even in fun, is just asking for trouble. Some people will use it as an excuse to justify busy hands while others will simply suffer brain-lock at the prospect. Booth babes may not be new to cons but a contest that promises to reward bad behavior with an opportunity to commit even more bad behavior? That just might be.

And “chest full of booty?” Wow, guys. Who are you paying to come up with this stuff?