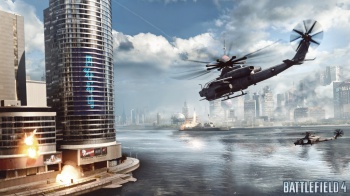 EA comments regarding Battlefield 4’s multplayer issues and claims it was “convinced” the shooter “was ready.”

It’s common knowledge by now that DICE’s shooter, Battlefield 4, has been plagued by various bugs and issues post-launch. During parent company EA’s Q3 2013 earnings call, the publisher’s executives has spoken out on the game’s multiplayer issues, with EA executive vice president Patrick Soderlund claiming that based on pre-launch testing and beta performance, they were “convinced (Battlefield 4) was ready.”

“When Battlefield 4 launched, it was a very complex game, launching on two entirely new console platforms, as well as current-gen and PC…We were pushing innovation heavily and we’re delivering 60 frames per second gameplay for 64 players plus the ability to connect via mobile tablet as a Commander into the product, coupled those with some very innovative features on the gameplay side. Based on our pre-launch testing and beta performance, we were confident the game was ready when it was launched. Shortly after launch, however, we began hearing about problems from our player community, and the development team quickly began to address the situation.”

According to Soderlund, the challenge EA faced with BF4 was different from anything they’ve seen in past titles, and that “there were different issues that only manifest its scale in the post-launch live environment.” He adds, “We’re taking multiple steps to evaluate what occurred and incorporate those learnings into our development process for future products, so we don’t experience the same problems again.”

In the same call, EA CEO Andrew Wilson also weighed in and called launching BF4 as a “complex effort” due to it being released on both current and next-gen consoles and PC; but also applauded how DICE acted swiftly to roll out patches and reiterated that BF4 is an “amazing game” that he’s confident people will be playing for a “long time to come.”

“Launching Battlefield was a complex effort, with our teams at DICE delivering a massive game packed with innovative new features for players on next-gen consoles, current-gen consoles and PC…Shortly after Battlefield 4 went live, we began hearing from some players in the community who were experiencing issues with the game. The Battlefield team acted swiftly to address the issues through game updates, and they continue to make refinements as part of our live service to ensure a great game experience for all Battlefield 4 players. Battlefield 4 is an amazing game in size, scope and gameplay, and we’re confident that gamers will be playing for a long time to come.”

While BF4 has been running relatively bug-free for the most part — at least on my personal experience, DICE is still not done tweaking the game, with the studio seeking player feedback on what to balance next. And as a thank you to fans, DICE is also holding a “Battlefield 4 Player Appreciation Month” for February, where Battlepacks will be given out to users who log in throughout the month.

What do you make of EA’s statements, and do you think the publisher has learned its lesson with Battlefield 4?