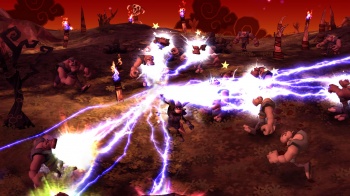 A rather … bizarre sale has been registered on Steam.

Ever since warbling, hairy-nippled canuck, Alanis Morisette, covered the concept in song, I’ve been fairly shaky on the exact definition of irony. Despite several earnest attempts to educate myself on the matter, I still pause before labeling something ironic for fear of getting it wrong and being laughed all the way out of Journo-town. But really, EA promoting an indie bundle? I’m pretty sure that’s ironic. That’s ironic as hell.

Each of the six games in EA’s Indie Bundle were developed by smaller studios and published by EA, and each can be had for 50% off, or 75% off if you buy the whole bundle. The games themselves are a likable lot. Klei entertainment’s Shank and Shank 2 are in there, as are Vanguard Games’ joyous top-down shooter Gatling Gears and Trapdoor Inc’s blood-soaked puzzler, Warp. All of those games are going for $5 each, while affable RPG-parodies, DeathSpank and Deathspank: Thongs of Virtue, round out of the bundle at $7.50.