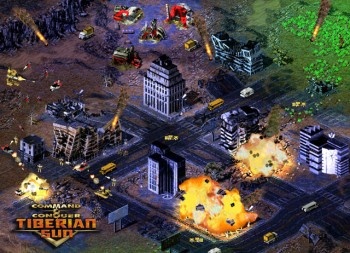 Victory Games is a new studio founded by Electronic Arts that will bring back the classic strategy franchise Command & Conquer.

A revamp of the Command & Conquer website went up last night before mysteriously disappearing revealed several details about Victory Games and its mission. The new studio has built bases in Los Angeles, Texas and Shanghai, China, and is committing all its Tiberium into forging a new AAA Command & Conquer game. The newly-appointed general manager of Victory Games is Jon Van Canegham, who previously worked on the Heroes of Might and Magic series at Ubisoft. Van Canegham was also the president, cofounder and chief creative officer of Trion Worlds, but he left in 2009 (or was fired according to some) long before all of the buzz about Rift.

“We’re not just working on a game, though. Our general focus is on the future of Command & Conquer,” Van Canegham said in an interview that was also pulled when the C&C website revamp went down. “That means updating a lot of the core technology to create a stable base for future development, and leveraging that work on this first game.”

Electronic Arts hasn’t really been focusing on PC strategy games of late. In 2009, the videogame conglomerate laid off large portions of the teams that brought us Command & Conquer 4 and Lord of the Rings: Battle for Middle Earth I and II. The last C&C game, Tiberium Twilight, was generally poorly received by critics so a reboot may be in order. We don’t know anything about what the new game will entail, if it reprise Joe Kucan as Kane, or if it will even be in the same timeline.

All we do know was in the “About” section of the aforementioned pulled website: The new C&C will “combine classic RTS gameplay with bold new technology, innovative new concepts and, as always, tanks by the dozen.”

Well, that could be any RTS really. Thanks for that stellar info.