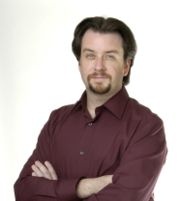 Gamers may have rejoiced to hear that Jack Thompson was disbarred, but Hal Halpin, the founder of the Entertainment Consumers Association, cautions, “Jack’s not going anywhere…… believe me.”

“I did take some selfish joy in receiving Jack’s email announcing his formal disbarment, but you need to understand that Jack and I have a long and quite personal history, and in addition, I must receive a half dozen emails from him a day, so this was one that I appreciated receiving. Let’s put it that way,” stated Halpin. “It’s important that gamers, while having every right to rejoice in their karmic victory, should understand that this really doesn’t diminish his ability to be a force against us. Jack’s not going anywhere… believe me.”

Last week, in a court decision celebrated by citizens of gaming-kind, lawyer Jack Thompson, who earned the ire of gamers by vigorously fighting against Grand Theft Auto IV, was disbarred from his the legal system of Florida for “cumulative misconduct…a total lack of remorse or even slight acknowledgment of inappropriate conduct.”

“I read Doug’s [Lowenstein, ex-leader of the ESA] reaction statement with a lot of interest, actually. As many who have been around the industry for some time know, Doug was my mentor when he ran the ESA and I the IEMA (Interactive Entertainment Merchants Association),” explained Halpin. “I believe I’ve gone on record before saying that one of the single largest mistakes we, collectively, made was ignoring Jack. I was certainly culpable in following Doug’s lead, but in doing so we left Jack as the only voice at the microphone; we empowered him, and it was strategically unsound and, in hindsight, altogether wrong. I know that Doug stands by his decision and instead hoists the blame on the enthusiast press, but I respectfully disagree. It was the endemic media which cast the light on Jack, his misstatements and factual inaccuracies and point-by-point, systematically addressed his assertions… all the while educating their readers, and the mainstream media and public who cared to listen, on the realities of the situation. I’ve always felt that the gaming press was the most underutilized weapon in the arsenal when it comes to battling our detractors and it was one of the first things we went about rectifying when we launched the ECA, just under two years ago.”

Halpin’s statement was in response to Entertainment Software Association founder and former head Doug Lowenstein, who voiced his opinion in a letter to Kotaku that the journalists covering Thompson’s actions legitimized him.

“The game press had a schizoid relationship with Thompson,” Lowenstein wrote. The press, according to Lowenstein, “loved to vilify” for the sake of producing controversial stories, as opposed to ignoring his actions and hoping he’d disappear. Whether the press served as a platform for Thompson’s preachings or promoted opposition to his cause is still a divided subject with opinions varying throughout the industry and gaming community.

Warren Spector Warns Hardcore Gamers About His Next Game