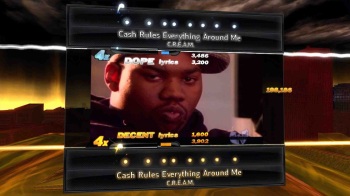 The complexities of music ownership have landed 4mm Games and Terminal Reality in legal hot water.

4mm Games and Terminal Reality, the studios behind music game Def Jam Rapstar, are squarely in the sights of music industry behemoth EMI over some rather complicated allegations that they failed to acquire the proper rights to numerous songs used in the game. EMI is claiming infringement on 54 songs and wants $150,000 in damages per song, adding up to $8.1 million in total at a bare minimum, plus probably a slice of the profits, legal fees and whatever else a court deems fair.

What makes the case a complex one is the fact that EMI is claiming only part ownership in songs: ten percent of DJ Khaled’s “I’m So Hood,” 16 percent of MIMS’ “This Is Why I’m Hot,” 30 percent of Lil Wayne’s “Got Money” and so forth. Even worse, EMI is claiming damages based on samples of songs it owns that were used in songs by other artists that were then used in the game, like “Stronger” by Kanye West, which features samples from Daft Punk’s “Harder Better Faster Stronger.”

Also potentially problematic is that Def Jam Rapstar allows players to make video clips of themselves “performing” songs and then upload them to community websites, which could violate EMI’s rights to the distribution, display and public performances of said songs.

The twisted maze of ownership rights could explain why the full rights weren’t acquired despite the participation of Def Jam, a label owned by Universal Music Group, another industry giant. The Hollywood Reporter says EMI was given a list of songs intended for the game, while EMI says it notified the studios about its rights to the songs but was ignored. Despite their roles in the game, neither Def Jam nor UMG are named in the suit.