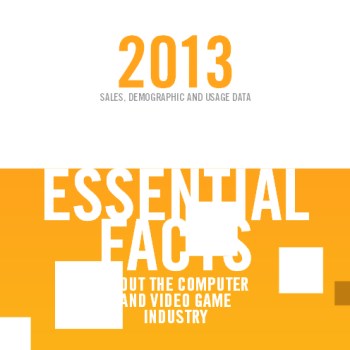 The latest research to come out of the Entertainment Software Association has determined that adult women gamers in the U.S. significantly outnumber teenage boys.

The ESA’s “Essential Facts About the Computer and Videogame Industry” study for 2013 has found that the gamer audience in the U.S. is almost evenly divided between men and women – 45 percent female, 55 percent male – which in itself won’t be very surprising to anyone who actually pays attention to this business. What is somewhat surprising, at least at first glance, is the difference in numbers between adult women and teenage boys: women 18 or older make up 31 percent of the “game-playing population,” while boys 17 or younger account for only 19 percent. There’s obviously far more room under that age-based tent for females than males, but the number nonetheless proves false the stereotype of the youthful, wasting-his-life “average” gamer to whom we are entrusting our increasingly dismal-looking future.

A few other interesting numbers: 51 percent of all U.S. households own at least one dedicated game console and those that do actually own an average of two; 58 percent of all Americans play videogames; and the average age of gamers in the U.S. is 30. On the parental side of the coin, 52 percent of parents say games “are a positive part of their child’s life,” 58 percent play videogames with their kids at least once a month and 93 percent say they “pay attention to the content of the games their children play.”

“This new data underscores the remarkable upward trajectory for videogames. It is an entertainment form enjoyed by hundreds of millions of consumers worldwide,” said ESA President and CEO Michael D. Gallagher. “A diverse and energized consumer base, remarkable new hardware, and outstanding software all combine to foster growth for our industry.”

The “2013 Essential Facts About the Computer and Video Game Industry” is available in full in PDF format at theesa.com.