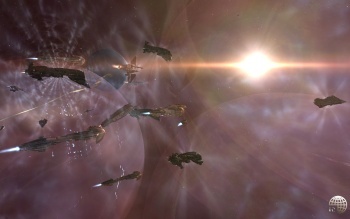 GoonSwarm, the most powerful alliance of corporations in EVE Online, has been disbanded and once again it appears that shenanigans are involved.

Even among gamers who don’t play EVE Online, the name GoonSwarm is feared and loathed by all. Okay, maybe that’s a bit dramatic but there’s no question that the Something Awful-based alliance of EVE corporations has built a reputation for itself far beyond that of any other, largely thanks to its absolute destruction of competing corporation Band of Brothers last year. BoB wasn’t just defeated, it was annihilated: Entire fleets defected to GoonSwarm, trillions of its ISK were looted and perhaps most humiliating of all, the Band of Brothers name itself was taken by GoonSwarm to ensure that even if the corporation was rebuilt, it could never again use that title.

It’s a bit ironic, then, that almost one year to the day later, GoonSwarm itself has suffered a similar fate: The most powerful alliance in New Eden has been forcibly disbanded, the victim of an inside job. This one appears to be self-inflicted, however: In a message posted on Something Awful, corporation CEO Karttoon expressed frustration with the current state of GoonSwarm and claimed that he had been planning the destruction of the alliance for about a month prior to actually carrying it out. In a final act of irony, he removed Goonfleet, the primary Something Awful corporation, from the GoonSwarm alliance and then submitted an application to Band of Brothers, the “holding alliance” set up by GoonSwarm last year.

“I am leaving enough ISK in the wallets of both executor corps to ensure the alliance bills can be paid for at least a few years, and I am riding into the sunset (quitting EVE), leaving all the ISK and assets locked in game,” Karttoon wrote. “I’ll probably check back in a year or so and donate it all to some random goon of my choice, assuming the game still exists.”

As you might expect from Something Awful, the destruction wrought by Karttoon seems to have elicited as much positive reaction from EVE players as negative, at least in the 240+ page forum thread dedicated to the game. As one player put it, “Hats off to you Karttoon. You were the worst CEO we had, but at least you got paid.”

And that’s how the cookie crumbles in the cold, empty vastness of EVE Online.