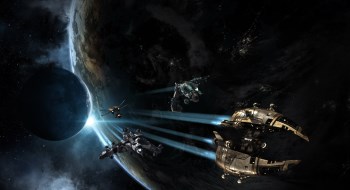 Ten years will soon add up to 20 free expansions for EVE Online, CCP’s deliciously vicious MMO in space, and Rubicon sounds like a big one. The coming expansion “represents the defining moment when the scales of intergalactic power will shift irrevocably to players, the immortal capsuleers,” CCP said in a press release.

Like most things EVE-related, it’s a statement that probably only really makes sense to people who actually play the game, but CCP claims that it will allow players to wage guerrilla-style war against their opponents from deep inside enemy lines. “Focused on individual and small fleet activity, new quick-strike options offer a powerful war tactic and a fresh style of victory in EVE’s ‘sandbox’ universe,” it said. The update will also add new exploration content and a new line of faction ships, and will see the Marauder, Electronic Attack Frigate, Interceptor and Interdictor hulls “re-engineered” for balance.

“With Rubicon we are beginning an ambitious journey for the next several expansions of EVE that will end up with players taking control of the most potent technologies in the universe and controlling space on an unprecedented scale,” Senior Producer Andie Nordgren said. “Their insatiable desire for impact and adventure fuels both this vision and our passion for making the largest science fiction game universe.”

EVE Online: Rubicon goes live on November 19. If details are your thing, you may collect them up at evenonline.com/rubicon.

EA Exec: Shigeru Miyamoto “Falling Down on the Job”