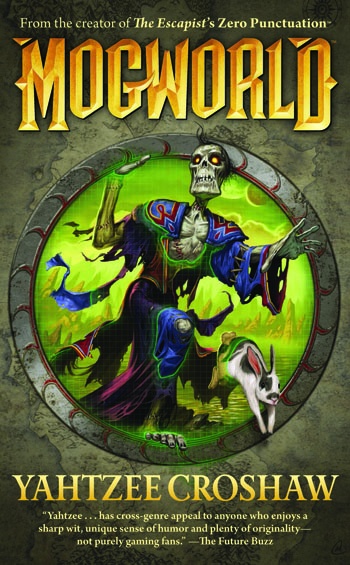 If you’re impressed by the amount of humor that Zero Punctuation‘s Ben “Yahtzee” Croshaw can cram into a five-minute video, then brace yourself: Croshaw is currently writing a full-length novel to be published by Dark Horse Books. Set for release in August of 2010, Mogworld tells the story of Jim, a minor MMORPG character who dies in a magic-school accident, only to be reanimated 60 years later by a renegade necromancer.

Dark Horse Books made this announcement in conjunction with Croshaw’s first stateside appearance at Philadelphia’s GameX this weekend, where he’ll be presenting never-before-seen Zero Punctuation footage, signing autographs and mingling with fans. If you’re within driving distance, you owe it to yourself to check it out.

Mogworld, a comedic fantasy novel with a twist, is the story of Jim, who, sixty years after dying in a magic-school mishap, is wrenched back to life by a renegade necromancer. All Jim wants is to die properly, once and for all – no easy task for a minor character in a MMORPG (Massively Multiplayer Online Role-Playing Game).

Croshaw’s animated Zero Punctuation reviews, which package prescient criticism with frenetic animation, off-color humor, and rapid-fire delivery, have made him a household name in the gaming community. Although Croshaw has covered a lot of creative and critical ground in his short career-before Zero Punctuation, he gained a reputation as an independent game designer and blogger, and he recently produced the pilot for a TV series, Game Damage – Mogworld is his first foray into published fiction.

“I love Zero Punctuation, and I had asked Yahtzee to pitch us a book about video games,” explains Mogworld editor Rachel Edidin. “The last thing I expected was a novel draft! And the next thing I knew, I was taking the manuscript home with me-less to finish it than because I had to see what happened next.”

Says Croshaw, “I’ve been trying to write novels ever since I first read Hitchhiker’s Guide at the age of eight, so this is a pretty big deal for me, and I’m very happy to be working with Dark Horse on this. Mogworld is an idea I’ve been kicking around ever since those dark, unproductive three months I spent playing World of Warcraft. It’s a bit of a cynical take on MMOs and the standard Tolkienesque ‘fantasy’ setting.”

Mogworld is announced in conjunction with Croshaw’s first stateside appearance at this weekend’s GameX show in Philadelphia. Mogworld is set to arrive on shelves in August 2010.